Over the river and through the student ghetto

I headed over the river to my dentist yesterday.  I mention this, because basically the only time I ride over to that part of the world, is every 6  months to get my teeth cleaned.  It used to be an awful route to even drive-  a road in a need of a diet: a lane and a half that encouraged double parking and stupid driver tricks.
Riding it so infrequently makes it really noticeable how it's changed over time.  There was only 1 double parked car in the bike lane,  down from 4+ last time I rode it (that could be chance), and I felt relaxed and comfortable the entire way across Brighton (the student ghetto)  and into Brookline. 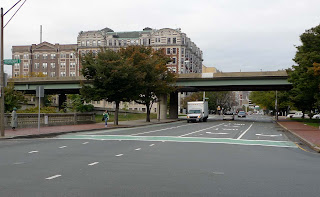 On the way into work from Brookline, I got to see first hand the new-ish bike boxes on Comm Ave.  They seemed to work pretty well.  I actually used one where Comm ave hits the public garden, and all the lanes turn right, but through traffic needs to be a lane or two over from the far left.  No issues, people seemed to understand that bikes belonged all along the way.   I think that the bike lanes on the pike overpass leading into Kenmore square are especially nice.  They give you some breathing room up a pretty steep hill, and create a bit more structure on what is otherwise a way too wide road when it's not lined with Fenway parking (which alas it will not be until the spring!).

It seems to me that Nicole Freedman has been very strategic in the way she's used limited funds to create a backbone for connecting Brookline and Brighton to downtown.   I know that there's some concern about the facilities connecting Dorchester and Roxbury,  but it seems like they're trying to create a corridor down Dot Ave, which seems like another backbone to help connect people into the city.  I had to drive down to Hyde Park for a baby shower on Sunday (I contemplated riding all the way, but I had to carry at 30 pound "Pack N Play and it was 12 unfamiliar miles through a couple of rough neighborhoods,  and I decided that it was a bit too much.)   There was actually  a fairly lengthy parkway with nice bike lane for much of the way through Mattapan, Milton and Hyde Park- the tail end of the "Emerald Necklace" of parks connected by greenways that was conceived by Frederick Law Olmstead.
I would like to tour that area by bike some day, but preferrably not by myself, and even more preferrably not with a large unwieldy baby accessory on my rack.  It seems like that series of parkways could be a real opportunity to create a bike "highway"  all up the length of Boston- it just needs some vital connections between the links of the necklace.  A goal for the next couple of years.
Posted by cycler at 9:25 PM