It was a tough weekend to be in a car in the Harvard square area.  The Head of the Charles Regatta was this weekend, bringing a triple whammy of out of town drivers, closed streets, and even more competition for limited parking than usual.

Although the Scientist will often drive in to lab on Saturday and/ or Sunday depending on how busy he is, and sometimes I'll borrow his car to run errands that are either far away or involve heavy bulky objects, instead this weekend we tried to go everywhere by bicycle
First we biked to the new outpost of Flour bakery near MIT.  This part of Mass Ave has been undergoing a bit of a renaissance, after years of feeling like a forlorn DMZ between the MIT campus and Central Square.   Evidently MIT owns much of it, and hasn't done anything with it for whatever reason.  The new Novartis compound helps, and there are a couple of new stores and restaurants,  which start to make it feel like a real part of the city.  We snagged seats in the window, and not only was the bike rack full, but bikes zipped by on a regular basis- I'd say 20 bikes went by while we enjoyed our french toast.
I then did a small tour of the bike stores of East Cambridge, looking for a dynamo tail light for Minerva. I hit Cambridge Bikes, where someone ignorant started to tell me I'd need a separate dynamo for the rear (A level look and a quick explanation that I'd done it on two other bikes earned me a guy who actually knew what he was talking about, but who didn't have any tail lights.
I stopped at the hardware store to get some paint, then hit up Hub Bicycles, which I'd never been in before.  They couldn't help me with the tail light, but I browsed a bit, looking for something that I did need.  I didn't see anything, but they were very friendly and I wish them well.  They have a great location right on the bike lane down Cambridge.  I bet they get a lot of neighborhood traffic needing mechanical help.  Unlike most bike stores, they didn't appear to be selling any bikes,  so they're making it on wrenching and accessories alone. One thing that I noticed that seemed like a great idea "bike pyjamas"  a tyvek or similar cover for if you have to lock your bike on the street in inclement weather. 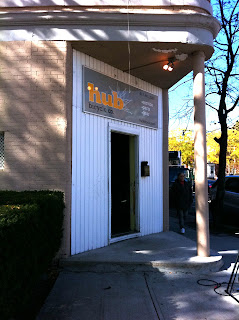 Finally, I swung past Broadway bikes, hoping that since they identify as a transportation cycling-oriented shop they would have something,  but nope.  They could special order it, but so could I,  and  partly I wanted to actually look at them and see how bright the different ones were, as I've heard some people (MDI) voice concerns that the standlights are pretty weak on the B&M rack mounted lights.  My fender mounted light is at least 90% of its full brightness on standlight setting, so if the tail lights are significantly dimmer, I'll get a fender light. 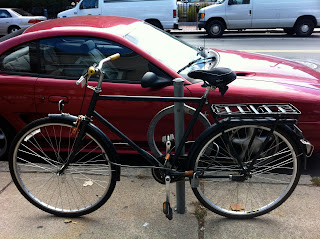 I did see this pretty cool Swedish Kronan military bike.  It has unusual geometry- it seemed really long for its height- as a comparison here's a photo of it next to Minerva, who is extra long. 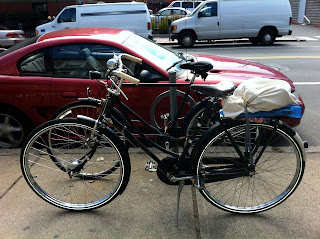 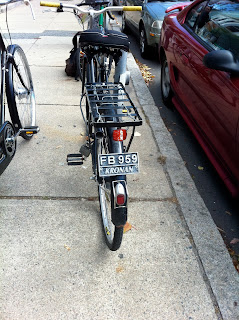 At my last stop, at the Grocery store, I locked up next to a bike with this sticker: 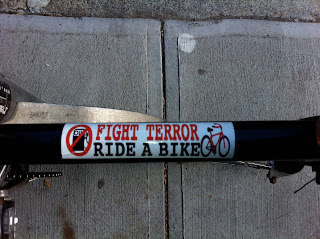 I then shifted into painting mode, and finished painting the front fence and the front steps.  I still have a little bit of touchup, but it's mostly done, which is a good thing since I'm running out of weather warm enough to paint in.  Next weekend will be raking and clearning gutters, and then I'll probably be shifting into inside project mode for the winter!
After an afternoon of painting, we went to a dinner party to welcome some new faculty to MIT.  We still didn't want to drive, so we set off on bikes to North Cambridge.  A quick jaunt down Mass Ave, and we were there.  It honestly was faster and easier than driving and searching for parking would have been, and it was a lovely crisp night.   The Scientist was kind of shocked by how fast I can move on Gilbert in traffic- we don't ride vehicularly together very often.
Sunday was grey and damp, and I was glad that I wasn't a rower.  We did finally break out the car to take the dog out to the Fresh Pond resevoir-  he needed a bit more exercise than a walk around the block.  Someone immediately took our parking spot, and we ended up parking 4 or 5 blocks away when we came back,  rather than try to find a closer spot.  The rest of the day was laundry and cooking for the week, with a quick trip by bike to Whole foods by bike to get some salsa.  Inspired by a dish I had at a restaurant, I made buttermilk biscuits from scratch, and we head them with home-made spicy red pepper jelly and prosciutto.  YUM.  Biscuits were a perfect thing for a grey day-  they're fast, they're delicious, and they make the whole house smell good!
Posted by cycler at 6:30 PM