Saturday the Scientist and I joined Cris, and a friend of his A.  on a 2nd annual Pastry Ride.  Last year the focus was on chocolate croissants,  this year it was broadened from the start to all kinds of pastries. The idea was to bike from bakery to bakery, sampling the wares, and going on a tour of Boston at the same time.

We started in Davis Square, and headed up up up over the hill to The Danish Pastry House in Medford.
I started with an almond pastry which was flavorful and flaky, but a bit too sweet. 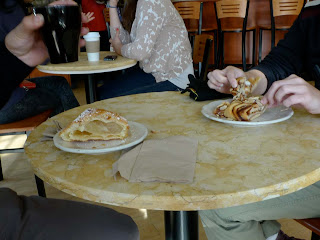 We chatted a bit over coffee and then headed to destination two,  Quebrada  Bakery in Arlington. 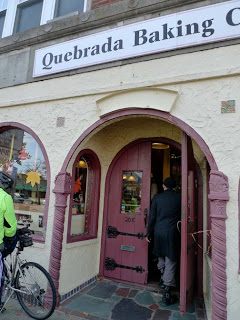 Here, I had heard great things about the Chocolate Crossaints, and fortunately there was a "mini" version,  which was important because we could already tell we would need to pace ourselves.  Full of big chocolate chunks,  the Chocolate almost overwhelmed the pastry.  Fortunately I could cut it with a macchiato from  barismo, the boutique roastery across the street. 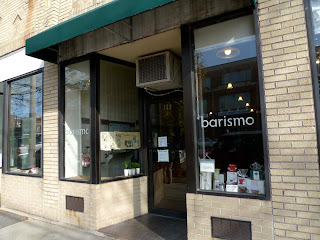 Then it was off to Cambridge via the minuteman path to Iggy's. Although I'm an Iggy's fan,  this was one of the more disappointing stops, as I opted for a slice of prosciutto pizza for a savory change.  Although all the ingredients were high quality, they didn't seem to work together.  It didn't help that we were sitting outside (no indoor seating) and the wind was strong enough that it was literally blowing toppings off the pizza.  I didn't finish it, and stuck the rest in my basket and we headed off around Fresh Pond. 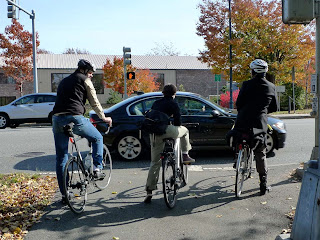 From there we stayed in Cambridge, heading to Hi-Rise Bakery.  By this point I needed a rest, and hung out while the others got a few things to try. 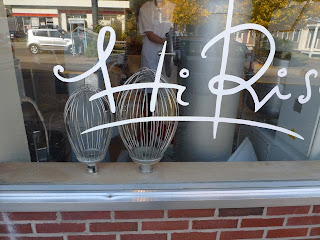 We chatted about industrial machinery and cycle tracks as we stood on Concord Ave, then headed down Huron to the Cambridge/ Watertown line to pack ourselves into Sofra.
This was a good chance to get some savories,  and the Scientist and I shared a Spanakopita with a wonderfully savory spinach and feta filling enclosed in layers of flaky filo dough.  By this point the day had warmed up and it was pleasant standing outside in the sun. 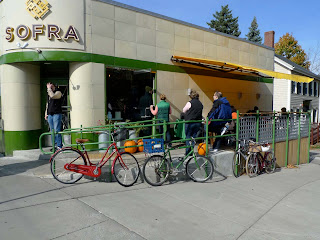 Back on the bikes we cut through Watertown and then headed through Allston to Brookline.  Not surprisingly this was the least pleasant part of the ride,  full of aggressive drivers and people double parked in the bike lane.  Finally we got to Clear Flour in Brookline where there was a line out the door.
Clear Flour's baguette is my favorite in the city, but my stomach was in no mood for buying extra food for later.  We shared a small blackberry- apple tart in the park- split 4 ways it was just enough to get a good balance of fruit and crust. 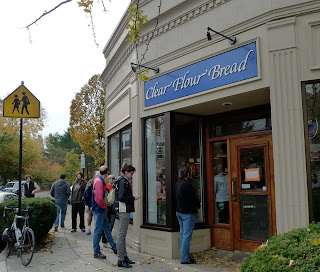 Heading deeper into Brookline, through a lovely neighborhood of single family houses that I'd never seen before, we stopped at Japonnaise,  a French- Japanese fusion place.  I got a Linzer cookie that was full of almond flavor, but a bit soggy from sitting in the case for a while.  I tried a bit of a Adzuki bean/ cream filled pastry puff too, which was much better than I expected, without the kind of earthy musty flavor I've had in Asian bean flavored desserts before. 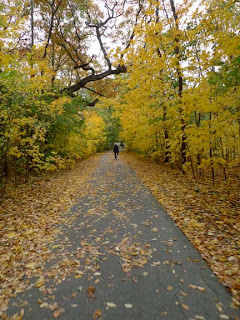 We headed down the Fellsway paths along the parks of the Emerald Necklace, and into JP,  where we stopped at Canto 6.  Again I wasn't up for much more than tea,  although we all shared the Scientist's pumpkin cake,  which had an amazing cream cheese frosting,  and was topped with roasted pumpkin seeds- a nice touch.  It was a very pleasant space, although small.

From here we jumped on the Southwest Corridor pathway,  which has been freshly re-paved.  This is an example of a multi-use path with separated ways for pedestrians and bikes. 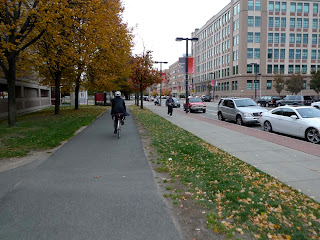 Although there were a couple of strays, people mostly seemed to stay in their designated space, and it was a fast pleasant ride to the South End, where we rode through brick rowhouses  with lovely yellow trees. 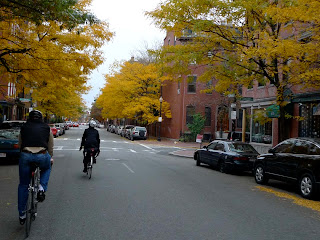 There we stopped at Flour,  where I "choked down"  a tasty macaroon.  It was clouding up by this point, although it was warm enough still to sit outside, until it started to sprinkle.
Luckily it stopped as we headed towards Beacon Hill for our last stop, Cafe Vanille.   This was one of the places I was most looking forward to, seduced by the images on their website.  I got a pair of Petit Fours- miniature versions of their full size pastries.  Unfortunately both of them were slightly stale and off a bit, which was really disappointing. Maybe they don't have enough turnover in their petit fours?
By this time we were thoroughly done with flour, sugar and fat!  A quick trip over the Longfellow and through Central Square took us home.  The Scientist had to head into work briefly,  and I got back on the bike for a quick trip to the grocery store for low cal dinner supplies.
We had the perfect restorative dinner after all this excess-  arugula lightly dressed with vinagrette,  topped with seared shrimp and with a side of Moroccan carrot salad- lemony, earthy garlicky- a perfect foil for too much sweetness.  We rode 30 miles or so, which probably helped offset some of the calories, but my body just isn't accustomed to eating that way.  Still it was a great excuse to "steeplechase" through the city, seeing parts of the city that aren't along my normal bike routes.
Posted by cycler at 9:11 PM