As suggested I met with the other riders for the tweed ride at the park in West Cambridge.
We stood around for a while admiring each others bikes.   One amazing bike was this early 20th century Austrian "swan frame" bike (with double curved downtubes) 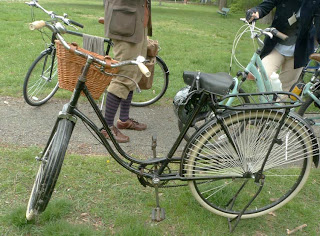 It had been passed down in a family,  and rehabilitated with new alloy wheels with a modern coaster brake to replace the  old "stamp brakes"  originally- the precursors of rod brakes and even less efficient). 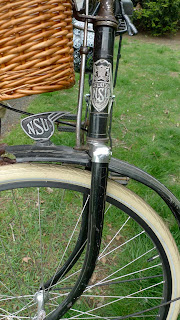 The owner had relaced the skirtguard through the fender holes using waxed sail thread- note also the rack- stand. 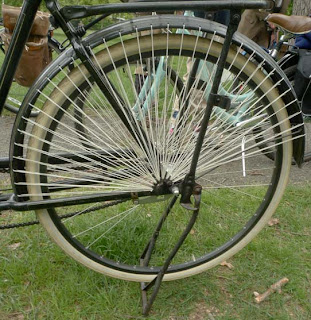 There were more modern bikes with amazing luggage: 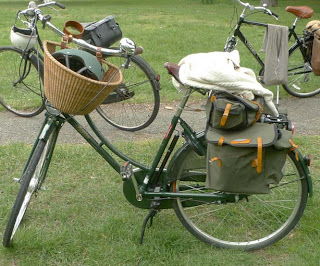 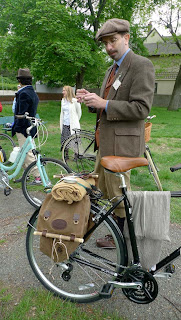 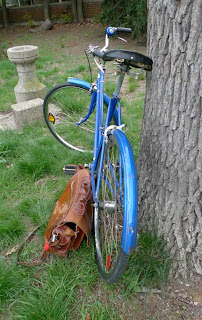 And some great tweedy outfits: 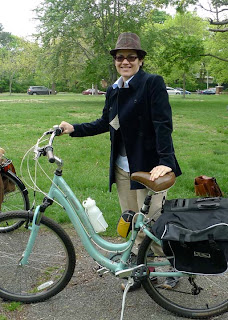 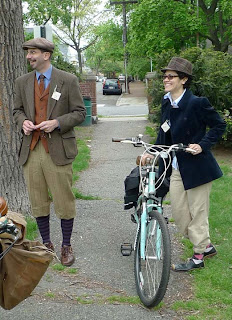 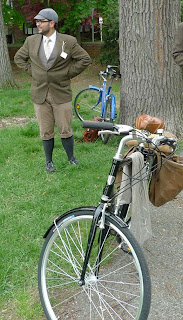 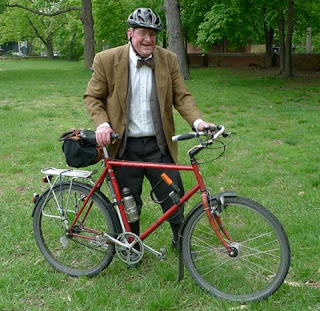 After a while it became apparent that there wasn't really a leader for the group (it turned out that the leader had broken his collarbone, and the ride had officially been cancelled, but we hadn't gotten the message)  So we set a course by iPhone and headed out.  After a couple of stops for course adjustments, we rode east along the river, turning South on North Harvard street, and then up Cambridge Street over the Pike.  We continued through Brighton to Beacon st,  being glad of the bike lanes which went almost all the way there.

A mile or so down Beacon we arrived at the Waterworks museum,  which was a steam punk delight.  We watched a kind of silly film, wandered around to see the exhibits and admire the machinery.  They let us park our bikes inside, because their bike rack hadn't been installed yet. 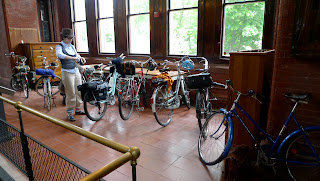 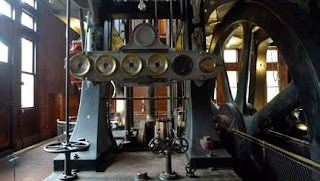 The building was amazing- A Richardsonian Romanesque,  with an enormous vaulted machine hall. 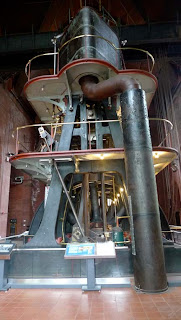 The thing that is so impressive about these old civic buildings was that even in buildings that were industrial in nature, every detail was carefully considered, and even the machinery had decorative flourishes and details which are missing in contemporary industrial equipment and construction. 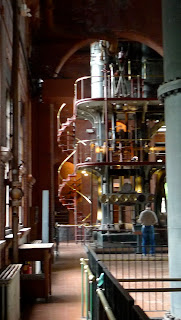 There was an amazing wood panelled ceiling 4 stories up,  and incredibly detailed brickwork. 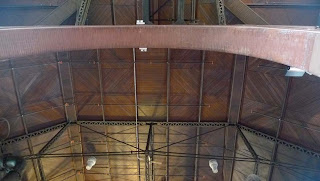 Unfortunately my camera was almost out of batteries, so I didn't get as many pictures as I would have liked.  I would like to go back and spend a bit more time on another occasion. 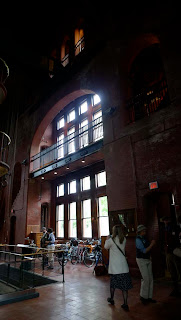 As we left the building for a group photo, we encountered a couple of people who I think were from the Charles River Wheelmen on a set of nice touring bikes.   They joined us for a bit, and several of them wanted to test ride my bike and the old Austrian Bike. 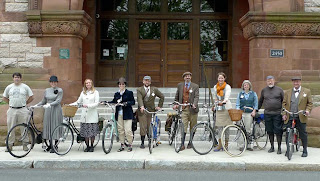 The main group headed off to find a pub for lunch and refreshments, but I headed back to Cambridge with Gabby, one of the other riders.  I was thankful for her company not only because I enjoyed talking to her, but because I had a slow leak in my rear tire, and she had a pump so that I could stop every so often to replenish it.

Other than the tire issue, and a tendency to drop out of 2nd gear (need to fiddle with the indicator chain) the 1936 Lady's Tourist handled beautifully on its first real ride since I brought her home last summer.  It's an incredibly comfortable bike to ride,  set up almost perfectly for my size.  It has a wonderfully upright posture,  with extremely swept back handlebars.  The gearing is also very commodious,  managing to feel both sprightly in 3rd gear, and comfortably stable in 1st.  If it wasn't such an antique that I was reluctant to mess with it, I would be sorely tempted to modernize it into an everyday bike.  As it is, I may give it a set of salmon Kool Stops and newish tires and see where that takes us.

After the (much quicker) ride home,  I took a quick shower- even though the day was cool, my vintage cashmere with silk lining dress was quite warm.   I then headed off on Minerva to borrow the Scientist's car,  and then headed out to Harris to pick up Gilbert.   I took him for a quick spin around the block and the difference is amazing- it feels so smooth- no longer like there's gravel in the freewheel.  They said that they cleaned out the roller brake and relubed it too,  so it should be good to go for another year or two.

After a day (week) of riding bikes with long wheelbases and narrow handlebars,  riding Gilbert is incredibly different.  The wide albatross bars, and relatively short wheelbase aren't actually unstable feeling, but definitely more responsive and active.  I like the "open ribcage" feeling that the albatross bars give me, but they almost feel cartoonish in comparison with the narrow cockpits of the DL-1 type bikes.  The frame is also a lot smaller,  and in comparison with the roadster frames, it almost feels too small.  All this will pass after a week on the bike I'm sure,  and then the DL frames will feel big again.

The wonky left crank was much more noticeable after a week off the bike.  I need to get it replaced and a new left blinky pedal.  I think there's something wrong either in the threading or the crank itself that eats the guts of the pedal generators- I've killed three on the left in the time I've had one on the right.
Still, it's great to have Gilbert back, and I'm very happy that his hub is up and ready for another year of service.  A funny note- Elton said that while the bike was waiting to be picked up so many people wanted to buy a creel basket, that they're going to order some creel baskets just to sell as bike baskets.  Nice to know that Gilbert is a trendsetter!
I also took a look at  the "Lyt" Led generator light at Harris.   This is a new B&M light that is a really attractive price point  $50-ish for a light that's brighter than Halogen, if not as bright as my Edeluxe.  I was hoping that it might be a nice fit in Gilbert's "other" eye socket,  but unfortunately it's a bit too big. 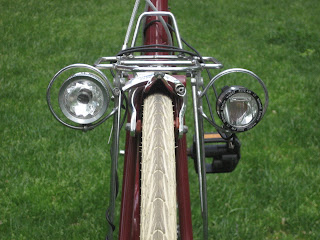