I stopped at the grocery store on the way home to buy a treat for the Scientist,  and when I was riding off,  I saw a UPS truck at an intersection ahead of me, about to turn into my path.  I give all big trucks a wide berth, so I slowed down a bit, and saw the driver look right at me.  Feeling assured that she saw me, I proceeded, only to have her turn right out in front of me.  Fortunately I was acting with an abundance of caution, so I only had to brake slightly,  but when I caught up to her at the next block (she'd stopped to make a delivery) I rode up to her door, and asked "Did you see me before you pulled right out in front of me?"

But immediately followed that with,  "but you're wearing dark clothes"
I said, "but I have a very bright light"
She said,  "you should have something flashing"
At this point, I just shook my head and rode away, pondering as I went.

This is a bit of a headscratcher.  "Yeah" she saw me and pulled out in front of me anyway?

Yeah, she saw me, despite my "dark" clothing?  and decided to punish me because I wasn't wearing neon lights?

Of course, neither flashing lights nor high vis clothing are required by law in any state I know of, and definitely not in MA, where you need a white light on the front and a red light on the back.   My lights are much brighter than many people's standard "blinkies"

For the record this is what I was wearing: white helmet (with planet bike superflash on the back) light grey sweater, black skirt with  grey tights (and red gloves).    Not exactly head to toe black. 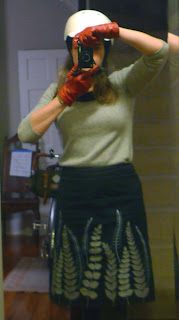 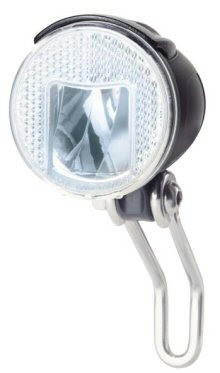 (It's what all the well dressed DL-1's are wearing these days!)
Basically she either didn't look carefully enough to see me, or didn't process that I was there, because she wasn't thinking about bikes.   After I confronted her (in a pleasant and reasonable tone) she started to make any excuse she could to excuse her carelessness and put the blame on me.
I know that the golden rule or urban cycling is to assume no one sees you.  But I also think that we have to start creating consequences for drivers who don't pay attention, consequences that are serious enough that people pay attention to what they're looking at!  Complaining to commercial driver's employers is a start, but I feel strongly that we need dramatically stronger liability laws to protects bicycles and pedestrians.
Updated-  I filed a complaint online with UPS,  and they emailed me to say that they'd forwarded it to the dispatcher. I did get a call from the dispatcher this morning (sat), but couldn't get to the phone in time.  He left a message apologizing and saying that he would call back later, although he hasn't yet, and the number he has called from seems to be permanently busy.  I don't want them to punish the driver, but I do hope that they will remind her to be careful, and perhaps keep a complaint on her record in case she later hurts someone.
Posted by cycler at 7:53 PM