Lovely day for a ride

The Scientist drove to a retreat/ conference last weekend, so I went everywhere by bike.
I started the morning meeting a friend whose husband was at the same conference at the ICA for "family day"( Free admission)  I wonder if her husband will care that his daughter had two mommies today :)?

I picked up some medicine at the vet first, and so came into the Kendall area via Inman Hampshire,  which I don't normally do.  There were tons of bikes out-  especially for a weekend morning, enjoying the bike lane down Hampshire.  It was a bit odd to ride into the city along my normal route in the low traffic of a Saturday morning.  The traffic has a completely different rhythm- moves faster, but in smaller less frequent groups of cars.  Lots of tourists in downtown, including this couple touring by tandem. 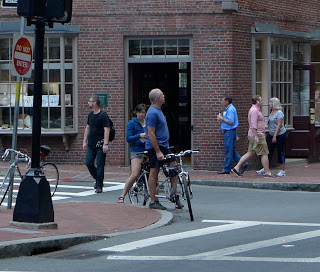 Still, more relaxing than normal, and it's always fun to go over the wooden bridge to Fan Pier
Unfortunately there were NO bicycle racks.  I asked the security guard why not, as they're required on new construction.  He said that they had moved them out of the way for a charity walk this morning.  I'm skeptical, but didn't feel like making more of a fuss.  The building is always fun, but the art was a bit beyond the 2 1/2 year old.  She kept asking "Why?"  and the answers were a bit too complicated. 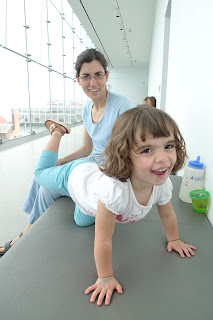 So we headed off to Haymarket where I bought some figs and some limes and some tuna.  The tuna was only $3 a pound which is kind of crazy. I wouldn't eat it as tartare, but for preserving I think it will be ideal. I bought 2 1/2 pounds and canned it in olive oil.  I did a bit of this last year, and it was sure tasty.  I also bought 12 pints of figs,  which cooked down over time to 6 pints of fig preserves.  Fig preserves being the Scientist's favorite for PB&J's,  I have taken to preserving it in Pints instead of half-pint jelly jars, and may have to buy another flat of figs while the figs are cheap (12 pints for $12) 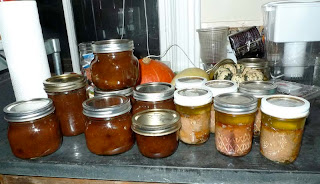 Tuna on the right, fig jam on the left.
I rode along the river home, and there were tons of people out enjoying summer's last hurrah

I dropped the goods  off at home,  and took a couple of knives that needed to be sharpened off to Stoddards in Newton (almost all the way out to Harris).  I dropped my favorite knife into the sink, and it needs the best professional attention to fix the bent tip.
I've been re-re-reading the Baroque trilogy (for which I blame Rose read) and there's lots in there about steel and forging weapons, so it was interesting to wander around their shop while I waited for someone to take my knives into custody.
On the way back, I was feeling the urge to thrift, but needed to pick up some essentials,  so I cut across Watertown,  hit up Target and headed across Cambridge to Rasperry Beret.
I LOVE my rack straps, which I can detach to loop through things- like this container of bleach. 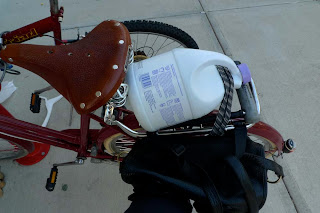 Passing through my old stomping grounds of Huron Village, I stopped at the bank, and noticed this lovely dark blue Raleigh.  I don't think I've ever seen a Raleigh in this color before, and I was messing with the rear wheel trying to determine the age, when it's owner walked up. 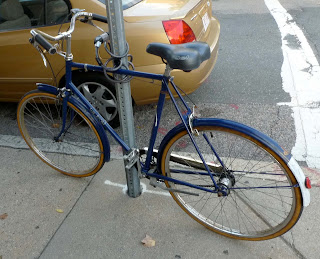 I was a bit sheepish, when she said she didn't think I looked like a bike thief,  and I explained about SA hubs and bike dating.  She said that she thought it was late 70's,  and I was too embarrassed to ask more, but told her I thought it was lovely (and it was, with its gumwalls and fantastic chainguard). 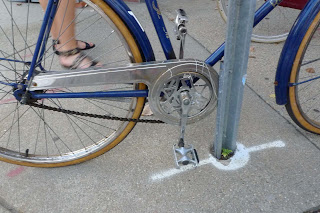 She hopped on (in a bubble skirt and gladiator sandals) and rode off.
Sadly I didn't find anything at the vintage shop,  and headed home after a long day of travelling, to work further on lacing up Minerva's new wheel.  But more on that later.
All in all, a lovely day spent in the saddle.
Posted by cycler at 10:01 PM