Worse before it gets better...

There's been an unfortunate development on my commute. 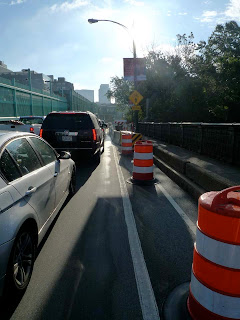 They've been jackhammering up what passes for a sidewalk on the last 100 feet of  the boston bound, boston end of the Longfellow bridge. While they work, they have closed the bike lane and one lane of  car traffic.   They did some work on the Cambridge bound side a couple of weeks ago, and closed the bike lane during that time.    I had some communication with the DOT about needing signage about bike facilities even on short duration projects,  like that one, and it was heeded on this project, as they put up a "Bikes may use full lane " sign. 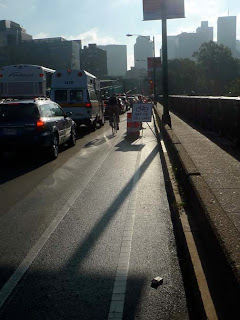 It's still pretty grim, and I just merge into traffic and wait as patiently as I can while we inch along.  I have seen a lot of bikers lane splitting (betweeen two lanes of traffic)  and doing dangerous filtering (between big trucks and a jersey barrier). 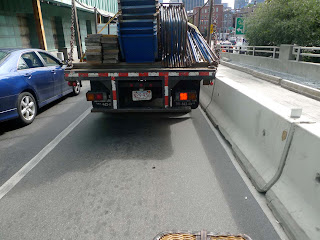 I mean- come on- would you try to squeeze through that spot?

I think we as bikers need to realize that part of being a vehicle on the road means that sometimes, you just have to be stuck in traffic too.

The "sidewalk" that they're replacing is a really lousy excuse for a walkway- about 18" wide- and it gets a TON of foot traffic from people trying to cross the river.   Unfortunately it looks like they're going to widen it at expense of the bike lane, at least for now.  It's unfortunate when human powered traffic is forced to fight over the crumbs of space left over by car traffic. 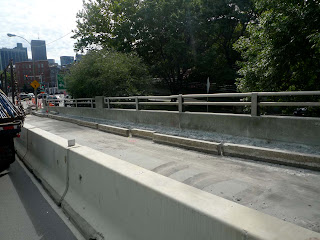 I know that with a historic bridge  structure, they can't easily widen the main span sidewalk,  but  the part that's so awful is actually a modern addition or replacement,  and I think that it could be adjusted to allow a better sidewalk AND a bike lane. 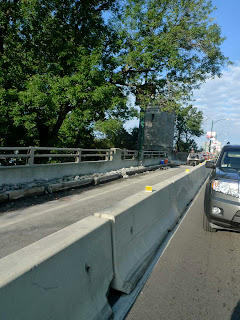 looking back- the historic section starts back at that tower

There is going to be a lot of work on this bridge,  and it's going to get worse (as it is at the moment) before it really gets better.  Still, I am hopeful that the long term plan and the end result will be a big improvement over the alternatives.  In the mean time, if this construction goes on for a while, I'm going to have to consider other options, probably crossing on the Mass Ave bridge and cutting through Back Bay.
Posted by cycler at 7:29 AM