As I mentioned earlier, I spent most of Sunday, taking Gilbert's chaincase off.
I love the simplicity of the IGH, and the dependability of the roller brake,  and the protection of the chain case, but boy does that make it a PITA to remove the rear wheel.

I have gotten reasonably good at removing the brake cable (made complicated by the fact that I'm missing the proprietary nut that the brake uses, and have a funky multiple washers plus banjo bolt setup).  Removing the gear cable is also reasonably simple now.  But to remove the chaincase itself, I had to take off the cottered crank.  Even though I have the fancy tool from Bikesmith, it's still really tough.  I bent over the cotter trying to press it out,  and then I had to hacksaw the bent end off, drill a hole down into it,  put a punch into the hole and drive it out with a hammer.
Not fun.  But I did take off the chaincase, and enlarged the rear hole that I think was causing resistance at the back.  I also shifted it back 5/16" of an inch, so that it would be more centered on the crank instead of shifted forward.  I'd like to add a couple of tiny brackets to hold it to the brackets brazed onto the frame, but it was not to happen this weekend.

But at the end of Sunday it was all relubed, reassembled and ready to go, except for the pieplate.
This is not the kind of plastic disk that goes behind the sprockets on a 70's road bike, but rather the center piece that covers the chainring on the chaincase.  I left it off, partly intentionally, partly because I forgot until I already had too much of things re-assembled.  But now that winter is coming, I felt it would be better protection for the chain if I had it on.   So I put it into place- and couldn't get it to snap in!.
I tried and tried, but it was like putting a tire with a really stiff bead on a rim.  I'd get it seated all the way around, and as I pulled the final bit into position: snap, it would come out on the other side. 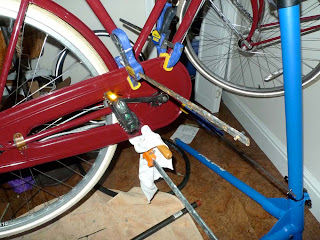 Finally I got almost every clamp I owned and clamped that sucker down, so that it couldn't pop out. 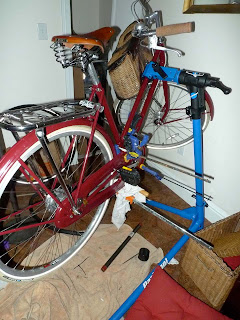 I think it's in,  I'm nervous about riding it in, in case something comes loose or isn't adjusted properly,  so I'll take a lot more tools in this morning than I normaly would.  Keep your fingers crossed for me!
Posted by cycler at 8:02 AM