Ok, just on the wall: 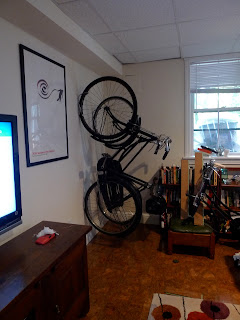 After much research, and two trips to the Container Store, I found a wall mounted rack to hang the Lady's Tourist and the Dawn Tourist in a semi- used corner of the basement.   A bike on the ground takes up so much space, that I kept stumbling over the bikes when trying to re-organize all the stuff that's been outside under a tarp during the basement renno.

So, after an hour of drilling holes, there they are.  I lined up the bottoms of the bikes about 6" off the floor, you can see how much longer (almost 1') the Lady's Tourist is than the Dawn.

I also had a mild attack of Shipwright's disease, and decided the change the front brake shoes on the 1938 Lady's Tourist, hereforto known as Agnes (I've been playing with names, and somehow this is the only one that's stuck).  I bought Fibrax pads at Harris, and have spent a fair bit of time messing with Minerva's  pads, so I thought it would be straightforward.

And it was, although not at all like Minerva.  Minerva has a set of stays that clamp onto the fork with a post sticking out.  The brake shoe itself bolts into a carrier, which slides up and down on that post as it's pulled up and down by the stirrup. The post is angled such that when you stop pulling the stirrup, the brakes slide down and away from the rim.
Agnes has a completely different, and to my eyes, better system.

She has a spring and lever arm that fit onto studs brazed onto the inner face of the fork. The spring and the lever arm are kept concentric with a funny little "bung" or interior washer.  The springs pull the pads away from the rim when you release pressure on the brakes.  I don't know how they compare in effectiveness, but they're a lot easier to deal with when adjusting and replacing the pads. 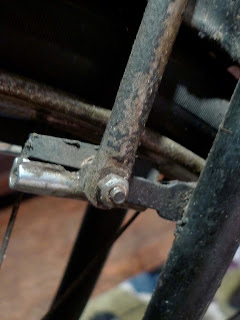 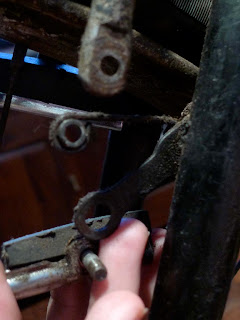 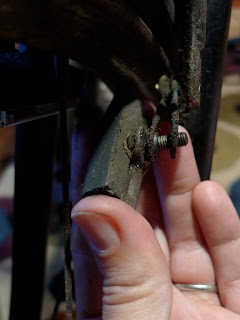 I think that I've discovered that a 9mm wrench fits these Whitworth bolts well enough to not round them.  Unfortunately I only have a 9mm socket, not a box wrench, so I'm a bit nervous about really cranking on it, without being able to see if I'm rounding it.  I think I need to buy a 9mm wrench (easier than buying a whitworth set -which I've considered, now that I have three rod brake bikes!!)  Fortunately the replacement Fibrax pads are 8mm, so the only thing that is a real problem is the bolt on the rod itself.
Once I had the new pads in, I adjusted them by pushing them hard against the rim with the rod connection loosened, and then tightened the rod connection so that the shoes are "just" clear of the rim when the brakes aren't engaged.  I didn't have time to take it for a test ride, but I noticed that they may be too tight, as when wheeling it across the room, it catches a bit.  Wheel must not be radially true.  But that's a project for another day...
Posted by cycler at 9:45 PM