Not a bad start

Despite a groggy morning (stayed up too late reading over the weekend and managed to shift my internal clock), it was a pretty good day for the first day after a holiday weekend.

I had good defined goals for the morning,  and a simple, relatively brainless drafting task to occupy the afternoon.  And then the fun started.

I had an interesting conversation with my co-worker P- about the differences in fitting your bike when you wear shoes with different thickness soles.  I know some people have a lot of problems with this,  I don't know if I'm just more loosey goosey than most, but this has never really been a problem for me.  I seem to be able to segue from platform espradilles to thin soled leather with hardly a hiccup.  I do however really notice awkwardness when I cycle in my (very comfortable for walking) Dansko clogs, and other flat-ish shoes.  I find that I drive my foot "home" more often in these shoes, and end up with the pedal under the arch of my foot instead of the heel.
Then on my way home, a random woman in the crosswalk complimented my (leopard print) shoes WITHOUT making a comment about how I happened to be riding a bike in them.

Finally, I met a very nice gentleman P__who was riding almost exactly the same route as I was.  He was a bit of a shadow most of the way down Cambridge, glimpsed out of the corner of my eye.  I finally turned and realized he was riding a lovely mint condition Phillips, which I complimented.  After we ended up tracking together all the way over the Longfellow, and onto the bike path, we rode together to Trader Joe's. 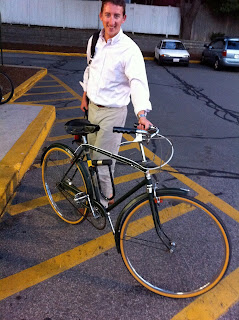 P__  works down the street from me, and just moved to Mid-Cambridge from Back Bay, so he bought a bike for his longer commute. He bought his 1955 Phillips from Cambridge Used Bicycle (instead of getting a generic BSO somewhere).  He is T-averse, so I encouraged him that it's completely possible to bike through most of the winter.    His bike is in fantastic condition, really lovely. 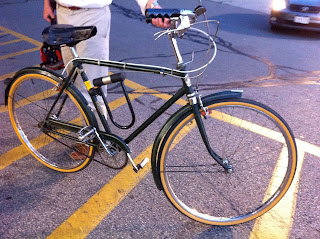 It has something that I've never seen before, a rear dynamo hub!  He doesn't know if it works or not, and plans to go to Quad bikes to try to buy a light for it tomorrow.  He says that he's been exploring Cambridge by taking a different turn off the river every night.  He has just discovered the cycle track on Vassar, and was excited when I told him that there was potentially going to be another all along Western Ave. 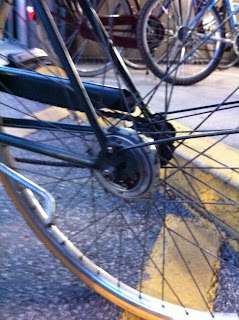 I'm happy to see someone starting cycling with all the right pieces in place.  Given how dark it was when I was leaving TJ's, I hope he gets some lights tomorrow,  and hopefully we'll see each other at a biking or  Livable Streets event or just on the bike path in the future!
Posted by cycler at 10:00 PM