Awfully cold to be riding

The super cold air that's been making its way east is finally here!
I had a bunch of errands to run, in locations that would be tough T connections, and all in Boston/Brookline where parking would also be tough,  so I broke through the new 8" of snow to the bike shed, pumped up Gilbert's tires (I know you're supposed to run low tires in icy conditions, but these were getting ridiculous) and set out:

Because of all the talk about the cold, even though it was "only" 24, I dressed really warmly.  Thick corduroy pants,  shearling boots, wool socks, a thin cashmere sweater, topped with my warmest heaviest wool sweater (a JCrew men's rollneck sweater- which I highly recommend as an extremely warm layer- it's so dense that it's water repellant).  Over that a mid- weight softshell jacket,  ski gloves with liners,  a nice warm chenille scarf,  Pod ear warmers, and a winter (no holes) Bern helmet.  I finally caved in and wore my plastic safety glasses-I still think they look dorky, but it was too cold not to wear something to protect my eyes.

By the time I got to my first destination, the Scientist's office  I was broiling! I took off the rollneck sweater, and stuffed it into my basket, where it lived for the rest of the day.  I headed down the Vassar street cycle track, which was mostly bare pavement, cut over into Cambridgeport through the park,  and then over the BU bridge to the Brookline REI.

I don't know why it is that retailers are convinced that they need to get spring fashions into stores in January.  Have they not looked outside? Do the people who make these decisions live in Miami?  It's one thing for Banana Republic to do that,  but REI?  EMS? places that are supposed to be preparing you for outdoor activities?  Don't they understand that it will still be winter for another month and a half around here, and that people might want to buy warm clothing suitable for going outside?   The selection of jackets and gloves was ridiculously picked over and poor, so it was a pretty frustrating morning.

After 2 hours of riding around between spring-stocked stores,  I headed to the South End where I had been invited by Chic Cyclist Charlotte to an afternoon of crafting (Crafternoon)  with some of her friends.  It was a great chance to chat and finish up some of those projects that are always lingering.  For my first project I made a backup grocery pannier- something I've been planning for months.  I wanted an extra grocery bag that I could roll up and keep with me (on the bike, or in my bag) for those days when the contents of my basket exceeds the capacity of my everyday pannier. 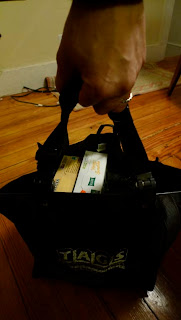 I started with a regular tyvek type grocery store "reusable" bag.  I used a set of Ortlieb QL2 hardware,  (my rack's tubing is too big for the QL1) and  bolted the hardware to the stiffener through the bag. 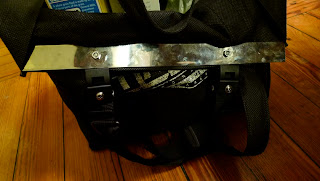 I'm not sure how it will work in practice- I think I'm going to have to add more stiffeners either to the bottom edge or the whole bottom, but I'm trying to keep it light and roll-able. 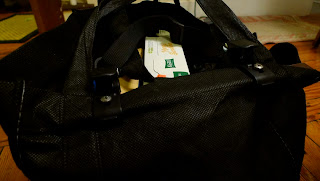 I also took apart an LED light for a potential extra headlight,  and did a little crocheting.  People were laughing at me that my "Craft" involved vise grips and tin snips.  I traded Charlotte a set of The Ortlieb QL1 hooks that are too small for my rack for some retroreflective fabric tape,  so more projects for both of us!


After a couple of hours of chatting, crafting and eating delicious treats (the Brown Butter Rice Krispie treats were amazing).  I bundled back up and headed back across the river.  The temperature had dropped at this point to about 16, and the wind was pretty fierce.  I was more or less OK when I was riding, but once I stopped I got really really cold.  I was shivering uncontrollably in the grocery store, and was all too happy to ride home in the Scientist's car with its heated seats.  We made a tasty Mole Amarillo from a new Rick Bayless cookbook that he got for Christmas, which was a great way to warm up!

It sounds like the  REALLY cold day is going to be tomorrow, with a high predicted to be 14.  I don't think I'm going to ride into work.   While it was OK to ride around on a Sunday,  I'm still a bit nervous about braving the icy verge with rush hour traffic on my tail.  I hit  couple of slippery spots, and just don't think it's worth doing that with a SUV trying to close pass me, when it's 6 degrees and windy.

When I used to run, I would say,  I was happy to run in cold, dark or wet, but not in all three.  I think  this is a useful rule for biking too with the slight substitution of bitter cold, icy, and dark (on the way home).   If you were one of the 8 or 9 other bikers I saw today, will you be riding tomorrow too?
Posted by cycler at 9:39 PM