Reunited, and it feels so good!

Gilbert was stranded all last week, after I left him in the underground garage at the Scientist's office. Actually the Scientist has left his car there pretty much all week too- parking being such a challenge in the snow.
I saw a lot of entitled parking behavior today- people parked 8', 9' away from the curb,  taking up all of a travel lane.  Given that there are also a lot of pedestrians forced to walk in the street, and the bike lane isn't plowed, it doesn't seem fair to further complicate the situation by parking carelessly.  I guess the City of Cambridge agrees, because they've been going around making unplowed parking spots as "no parking- tow zone."  Haven't seen any tow trucks yet though.

Anyway, I rode Gilbert home Friday night after his week of absence.  I was worried, and it was slippery, and I had a couple of OMG moments (and not in a good way).  I made it home though (the worst moments were on an almost completely unplowed back street near home).    This is "Boston Bike stand" (aka the 3' snow bank in my front yard. 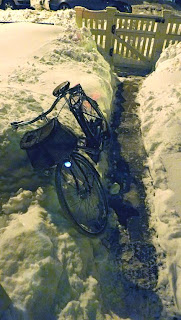 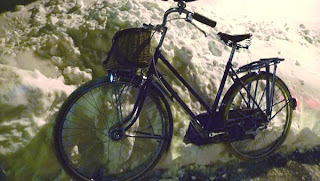 Another "Boston bike stand"  I just wedged the back wheel in a snowbank, and it stood up just fine- who needs a kickstand when you have a giant pile of snow? 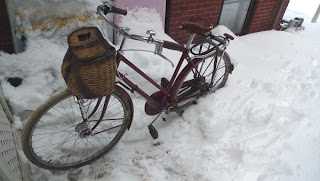 I had to shovel out a path to the backyard bike shed to put Gilbert away for the night,  but I was thinking about how much easier it was than digging out a car!

On Saturday I ran all my errands by bike- Grocery shopping,  taking away the compost, the library,  the hardware store, the dry cleaners', a sandwich place and a coffeeshop.  A full load coming home: 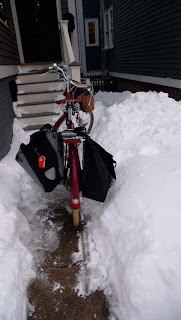 1369 Coffee in Central square wins a big gold shiny star for having completely shoveled out the bike racks in front of their fine establishment.  It was SO nice after a day of improv parking to have a normal bike rack experience.  I ran into a woman from my defunct book group, and we commiserated about snow parking. 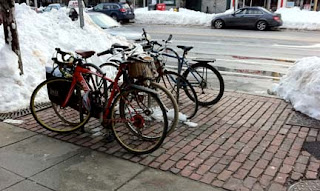 I tried out my new grocery sack pannier, and so far so good. 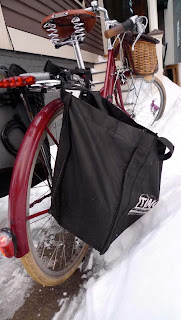 My chainstay and fender stay are doing a good job of keeping it from getting into the spokes,  and it folds down nicely.  It obviously doesn't have much structure. 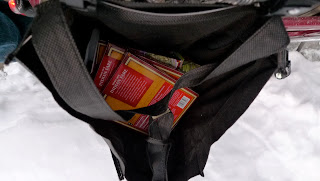 The idea wasn't that it was going to be a utility pannier,  but just a bag that could stay folded up in my main bag every day, and I think it will do fine for that.   I added some velcro on the handles to use both as a tie strap when it's rolled up and to keep the handles from flopping around on the bike.    However, I am thinking that I would like a more utility pannier, and may try to convert my lousy no-latches grocery pannier with ortlieb hardware too.


It's great to have Gilbert back home!  I feel like I've regained all the independence that the snow had taken away.  The Scientist is going away for a couple of days, so it will be nice to have options outside the T on these snowy days.
Posted by cycler at 6:21 PM