I dug a little path to the bike shed yesterday to take Gilbert out for the first time since Wednesday's blizzard.  Lots easier than digging out a car, I have to say!  I loaded up with two panniers, stuff I needed to return at Target, grocery bags, two bags of compost,  and a pair of slippers I needed to exchange for the Scientist, and set out.

The roads were pretty lousy.  The weather has been so cold since the snow, that there's really been no melting at all.   Even the middle of the street, in the tire tracks there are all these ice plateaus- ranging in size from 4" x 4" x 2" bumps to 4' x 10' ice floes.  They're not super slippery, but they're a hazard, and I wouldn't feel comfortable riding fast over them.   I would say that the roads are 80% clear,  but I would expect them to be 100% clear by now.  The bike paths and shoulders are, not surprisingly an impassible mess.  This is sad, because I'm ready to start biking around again, but it just doesn't feel safe to me,  especially riding fast in traffic.  It's supposed to warm up a bit and maybe rain on Tuesday, we'll see what that does to the roads and re-evaluate.

I ended up deciding not to do my in-town errands by bike.  It just felt too precarious on the roads.   I needed to do two errands out in the 'burbs, and had arranged to pick up the Scientist's car for those, so I just drove for all my trips.

In the evening, after a lot of errands, my conclusion was that it's not actually any easier to run errands in town by car than it is by bike.  The advantage of not having to worry about how to carry everything, is offset by the challenge of finding parking at each destination.  It didn't help that somehow I didn't find time to eat lunch, so I was pretty tired and cranky by the end of it.

So I settled in with season 3 of Mad Men, and an appropriately retro dinner:  Shrimp cocktail, and iceburg lettuce wedges with blue cheese dressing.  For dessert, I made cream puffs filled with almond flavored whipped cream.  YUM!  Cream puffs are so easy, and so dramatic.  I used a 1972 "Joy of Cooking" recipe to stay almost period correct. 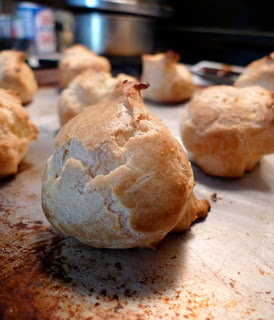 The recipe is simple but  unusual- it's not like normal cooking, or like normal baking, but a hybrid of the two:
Preheat the oven to 350
Bring 1/2 cup water and 1/4 cup butter to a boil in a quart saucepan, add a pinch of salt and a teaspoon of sugar.
Dump in 1/2 cup of all purpose flour, and start to stir frantically.  The dough will be "rough" and chunky, and then will magically turn smooth and silky and shiny, and pull away from the sides of the pan.    Turn off the heat and let the dough cool for 2 minutes.
Add 1 egg, and stir it in until it's thoroughly mixed in and is smooth and silky again.  Repeat with a second egg.
Drop by tablespoon-fulls on an ungreased baking sheet,  and bake for 25  minutes at 350.    Pierce the puffs with the tip of a knife in an unobtrusive spot to release steam.  Recipe makes about 12 puffs 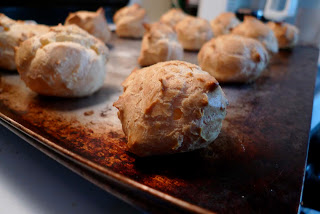 The little golden irregular lumps  (the French name for this type of dough is Pate Choux - Cabbage paste)  are hollow and can be filled with anything you can pipe through a pastry bag-  whipped cream,  salmon mousse,  vanilla pudding.  You can also cut them in half and fill them with slightly more solid fillings like ice cream.  I don't actually own a pastry bag, but I find a ziplock bag with one corner clipped off works great.  A great fancy dessert without much effort,  and a traditional favorite, worth reviving.
Posted by cycler at 3:59 PM