A day in the biking life

I headed away from work this morning to an early appointment.  I was riding along the path, almost to my destination, and looked away for a moment to check my watch.  I heard a gasp and a "look out"  and then I hit a wire stretched across the road and heard a yelp.   Fortunately I wasn't going very fast and stopped almost immediately (in less than 5')  A woman was walking her dog, and the retractable part of the leash was strung across the path, almost invisible, and I had hit it.  Fortunately for both me and the dog, she'd let go of the leash, so we both got jerked a bit, but neither got flung through the air.  My Dad complains about this a lot- those leashes are a particular hazards to recumbent riders because they're often at their face level.

Anyway, I scratched the dog behind the ears, and handed the lady her leash back (she had been walking on the opposite side of a snowbank, which is why I didn't realize that she was a hazard), and continued on.  Poor little dog!

On the way back to work, I passed home, and decided to go in and  upgrade a few key parts of my wardrobe.  My regular tights just weren't quite warm enough and I needed warmer gloves, and hadn't had time to find them before my appointment.
This is what I looked like as I left the house again at 10AM. 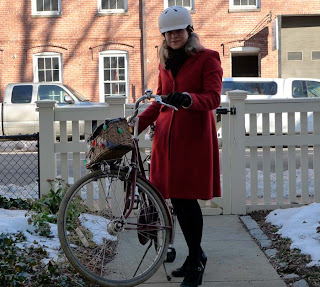 With my wool tights and shearling gloves, I was so toasty on the way in, that I had to stop, take off my coat and cardigan, and put the coat back on and the cardigan in the basket.

I stopped a couple of times to admire the cool patterns in the ice on the Charles. I'm guessing that the swirls were snowdrifts that were absorbed into the ice through melt/thaw cycles. 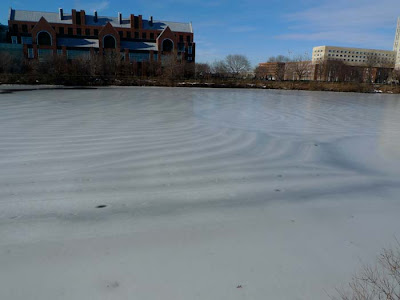 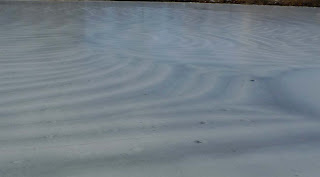 Can it be coincidence that the curves of the ice mirror those of the bridge?  I don't know how, but it MUST be related. 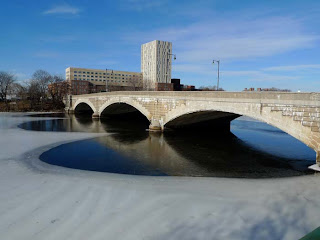 Some ducks huddling on the edge of a floe next to the open water by the MIT dock- most of the docks have something that keeps the water too agitated to freeze right at the dock- Ice is hell on fixed structures.  And I think it would be tough being a duck in this climate, no matter how much fatty insulation they have. 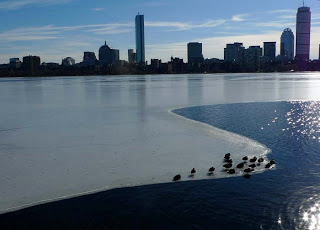 After a longish day of work, I made one of my least favorite commutes home- though Kenmore square to REI and then over the BU bridge.   This is kind of a gnarly piece of vehicular cycling in several points.  I sometimes stay on Tremont and Charles Street, but tonight I just cut through the Common- didn't feel up to dodging busses and potholes on Tremont and drag racers on the 4 lanes wide Charles Street. From the SW corner of the Common,  I merged onto Beacon,  which is much wider than it needs to be, so people race from stoplight to stoplight.  Luckily the right hand lane is generally empty with occasional double parked cars serving as bollards.  Today the right hand lane was 6' wide because of cars parked out in the lane because of the snow- a luxuriously wide bike lane.  I've learned a shortcut that avoids the worst of Kenmore square (where 2 1/2 major streets meet at acute angles- full of cabs and buses).  If you turn left on Charlesgate, but don't go up onto the overpass that takes you to the Fens,  there's a funny little extension of Newbury street (Boston's fancy shopping street in other blocks)  with rowhouses on one side, and the pike on the other.
This connects to Brookline just past Kenmore, and delivers you past Fenway park and down to REI. 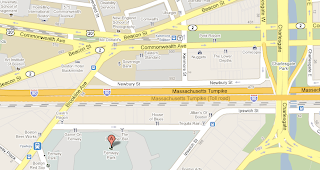 At REI,  I bought some Earbags.  Charlotte of Chic Cyclists RAVES about these, and I finally decided to try them.  I wanted to buy a pair for The Scientist, who needs to keep his ears warm post ear-infection,  but they didn't have extra large.  I tried a pair on the way home, and I'll have to add my raves too. They're warm, comfortable, and stayed on surprisingly well!  They're on sale at REI- may have to buy a couple of pairs, because I forsee losing some.

Then I have to go over the pike again and through the BU bridge interchange, which is a scary intersection to drive through, with some people going straight, some turning right, and most (including me) turning left.  Then over the BU bridge as fast as I can with someone right on my tail, through the roundabout, and finally to the relative tranquility of the bike path.
I stopped at Trader Joe's to pick up some salad fixings, and saw a guy with a lime green messenger bag, and a slick fixie with lime green rims, lime green bar tape and lime green pedals.  I wish I had pulled out my camera while I chatted with him, because it was pretty impressive.

Home to a late supper of steak salad (the lime juice and olive oil dressing must have been good- the Scientist practically licked his plate clean).   That's a typical day!
Posted by cycler at 11:00 PM