I have a confession to make.  I've been casting admiring glances, trolling for "dates" on Craigslist, and I've been coveting another's property.    In short, I've been looking for a touring bike all summer on Clist and in various vintage venues (say that three times fast).  I even talked the Scientist into driving me all the way out to Dudley MA for the swap in hopes of finding a diamond in the rough.

I went so far as to dig out the bike my Dad bought me in high school,  on which I have ridden many miles, mostly in the rolling hills of the Ozarks,  but also in the steep hills of Salt Lake City,  and the flatlands of Houston and Boston.
It's a Trek 420 from1989.  A completely decent "sport tourer".  It's a featherweight compared to Gilbert,  or any of my other bikes.  After striking out so many times (a near miss of a Miyata 610 in my size was particularly heartbreaking), I thought that maybe I could fit out the Trek to be a touring bike,  because The Scientist and I have dreamed about doing some long rides, and even maybe some multi- day touring.   While I've successfully ridden Gilbert 70 miles in a day,  I don't think that that's really a solution. 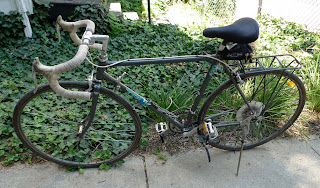 The last time I rode the Trek was in 2008, which I remember all too well because I was right hooked.
It was the only time I've had an accident in four years of daily commuting. Robert was in the shop, so I rode the Trek.  I was filtering up, and someone in the slow moving queue suddenly turned right.   I managed to stop/ swerve/ push off their quarterpanel,  and was only scraped up by falling,  but it was scary, and I was convinced that if I'd been riding an upright bike it wouldn't have happened.  It wouldn't have happened if I weren't filtering either, and it's one of the reasons that I generally don't anymore.

So I thought maybe I could make it into a touring bike.  I have it, it basically fits (maybe a touch small) and it's a decent frame and a perfectly fine set of Shimano components (Biopace!!).  Additionally I was having a stressful summer and decided that strenuous exercise was a better solution to stress than Ben and Jerry's  Despite years of neglect,  all I had to do was pump up the (Specialized Armadillo) tires,  remove the misguided clipless pedals *, and re-install the original toe-clip pedals that were still lingering in my bike parts bin. (moral of the story-never throw ANYTHING away) 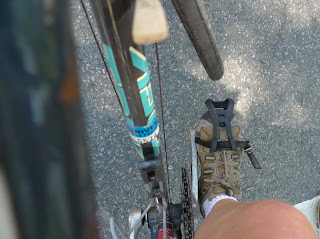 * there's a whole post about how terrible an idea the clipless pedals were...I also raised the stem to the "max" line. 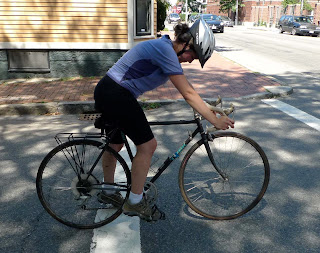 I took a couple of 10 mile rides, mostly alone, but a couple with the Scientist.  And,  well, I'm not sure it's worth the effort of conversion.   Compared to Gilbert, the Trek was so squirrely- feeling like it will turn on a dime,  when all I want to do is cruise effortlessly along.   It probably doesn't help that while I feel comfortable going fast on it,  I'm very tentative when going slow, which unfortunately, makes me slow even further, when perhaps I should speed up for greater stability.  (I have this problem skiing too).  It's a lot of fun to really go fast,  and with legs honed by pushing 45 lbs of bike around an hour every day for years,  I could easily keep up with the longer legged Scientist.  I even tried drafting for the first time,  which was a bit too much for my fledgling confidence.
I was comfortable for the long and mostly deserted straightaways along the lightly trafficked river roads in Watertown,  but once I ended up in traffic either in Cambridge or in Waltham, I found myself tensing up, worrying I would lose control and be hit by a car,  or when on the path, worrying I would hit a pedestrian, feeling like I had to contort my body just to see where I was going.  Gilbert may or may not be perfectly adjusted for my body,  but after so many rides,  I've adapted to him, and feel like the bike is an extension of me.  I don't have to think about turning, I just lean and shift and I'm turned.  I feel like I have to think (worry) too much on the Trek.

I rode a Clist Shogun 400 and despite somewhat crappy components, and a way overblown price,  it felt a lot more comfortable than the Trek.  Maybe not quite as "go fast"  but a lot more like a bike you could ride one handed for a minute without crashing.  My coworker P-  who has done a lot of Clist finding and seeking,  says that winter is the best time to find bargains,  so I'll just keep looking and hoping for the right bike to come along.
Posted by cycler at 10:47 PM