How the Pedals failed

I ordered a triangle head screwdriver online after striking out at Radio Shack,  and promptly took apart the dead pedals, and one live right pedal. 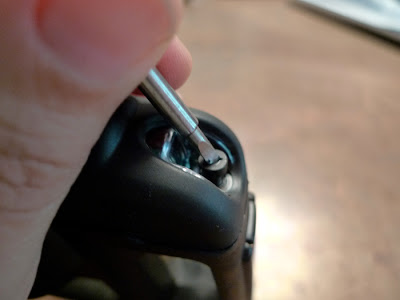 Removing the black end cap reveals a circuit board and LEDs, which lifts up off of a bayonet mount 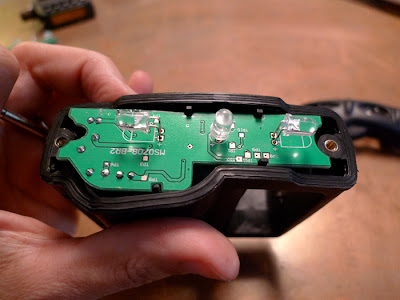 There are three gears.  The one with the visible screw head is the end of the drive shaft (pedal)  The large one in the foreground has two tiers,  one in back with 18 teeth, and one in the front with 35.  The smaller cog mates with the pedal spindle, and the larger one mates with the generator spindle (the metal one on the left), creating current. 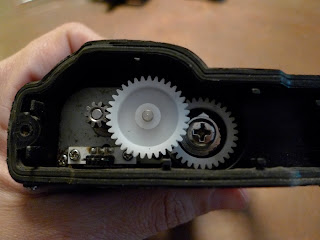 Bayonet mount for the circuit board on the right 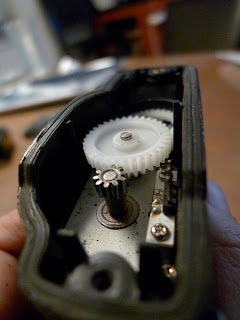 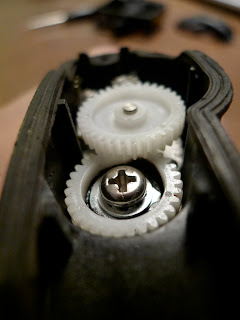 When I removed the intermediary gear on the two pedals which no longer work, it became obvious why they don't work anymore- a section of teeth on the smaller cog are sheared off. 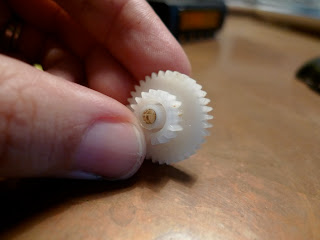 When I took apart the right pedal (which has never been installed)  the circuit board is handed, but the other parts are basically the same, just a mirror image.   I took the center gear out of the good pedal, and put it in the bad pedal and reassembled it and the generator and the  circuit board and LEDs are perfectly fine.
So,  if only I could get replacement gears I could at least fix the one bad pedal whose threading I didn't mangle.  A cursory search though shows that it's not that simple.  I could probably get them custom made, but finding one with exactly the right diameter and number of teeth on both the top and bottom, the right bore for the spindle and the right height "stock" would be a real challenge.  I found a very technical post on getting custom gears cut for repairing a iRobot Roomba, and it sounds like the tooling is pretty expensive ($300)  and only starts to make sense if you are making hundreds of them.
I may contact Pedalite and see if they would sell me replacement gears.  Their customer service has been really good,  so they might do it.  It means that I would have at least one more left pedal that would still be operational, and a right pedal that's never been installed,  and I could put both of them on another bike- which might be good if I start riding Minerva more.  It's also possible that if they have a lot of failures of this gear they could/ should consider making it out of metal instead of plastic.  It would probably cost a few cents more, but maybe they'd consider it in order to make a more durable long lasting product.
Posted by cycler at 3:32 PM