Although this is often true, it was doubly so in Cambridge this weekend, as the annual Head of the Charles Regatta snarled traffic and made parking impossible in my neighborhood.  I had to borrow the Scientist's car to take Gilbert out to Harris for an emergency pedalectomy,  and it was pretty awful.

Adam at Harris was pretty certain that the crank I had bought at Broadway was french thread,  which would explain why it devoured my pedal so quickly.   He managed to scrounge a compatible (if not matching) crank from a Robin Hood parts bike,  and even was generous enough to swap out my stripped but otherwise perfectly  good left pedal with the left pedal on their display model, which doesn't need to do anything except flash.

Interestingly my thought about "permanently" affixing the pedal to the crank wasn't that crazy, as he felt like the (worn) threads of the new old crank might be a bit wobbly, and installed it with red loctite,  the kind that you need to heat with a torch to remove.   Luckily, I have a torch,  but Adam gently suggested that perhaps for an everyday year round workhorse bike I should bite the bullet and spring for a Phil Wood BB and singlespeed crankset that would be a bit less finicky and more robust than a cottered system.  Raleighs of this vintage having an odd 26 tpi bottom bracket threading so it's either a Phil wood, which makes a special Raleigh cup, or one of the "universal" threadless sleeves. I know that Velo Orange sells the latter, but I don't know how well they work (Adam suggested not that well).   I have certainly considered swapping systems, and he's probably right about a more durable and simple system for a workhorse bike.  Will put it on my future plans list.

When I finally fought my way back home, and found parking many many blocks from home, I spent a couple of much needed hours organizing and cleaning house in preparation for dinner guests.

When I was finally ready to start cooking, I needed some ingredients, and Gilbert's red loctite was still setting, but I wasn't about to drive.  I had ordered special axle nuts for Minerva, but through a warehouse error, they sent me the wrong size.  The new ones won't arrive until next week (they're sending them for free in apology for their error)  but I decided that the front wheel was stable enough for a couple of quick stops.   Riding down Prospect street, the cars were so far backed up that I felt comfortable filtering, and soon found myself in a little crowd of  completely unrelated riders.  We joked that we were a mini-mass,  and as the lane narrowed at the intersection, we took the lane together- 6 riders in approximately the same footprint as a midsized sedan.  I managed to whip out my phone and catch a couple of shots before the light changed. 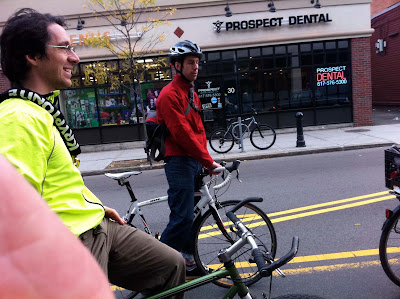 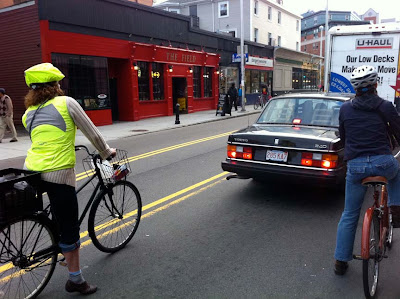 At Trader Joe's people had decided it was easier to bike as well- there was this aggregation of interesting bikes- AVelorbis with a cool front wine box, a longtail, and a bike I'd never heard of called a Von Backhaus (that Google tells me is a Danish brand), all locked together in a giant nugget of transport bike goodness. 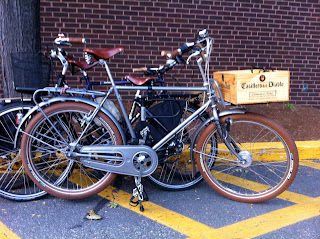 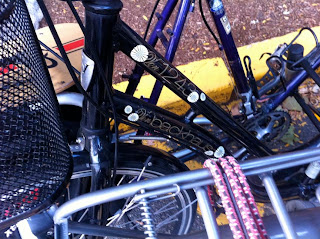 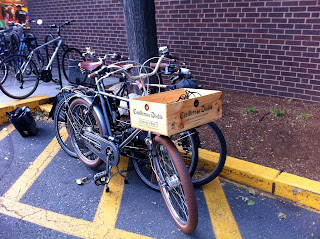 The "Von Backhaus"  had a unique skirt guard that I'd never seen before.  My first thought was DIY,  but with all the snaps across the back and the difficulty of sewing that kind of cordura nylon, it's probably storebought. 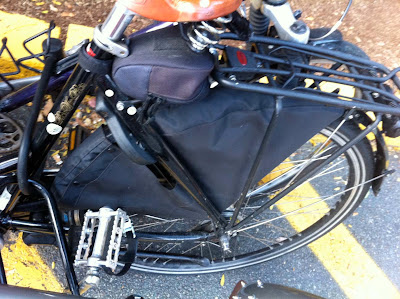 At the head of the Charles, the road was closed to cars, and there were tons of bikes everywhere, locked to anything that wasn't moving.   They did have some temporary bike racks, but only in one location,  so people locked to whatever they could. 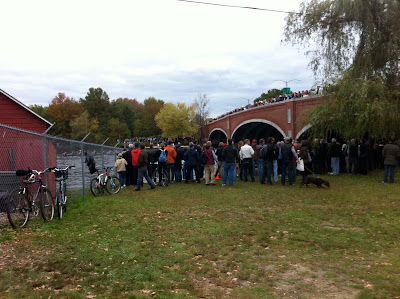 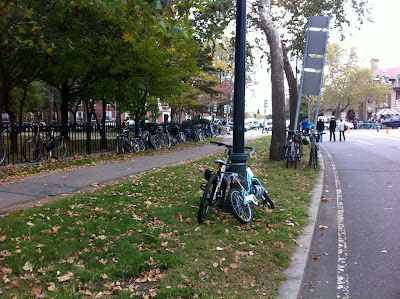 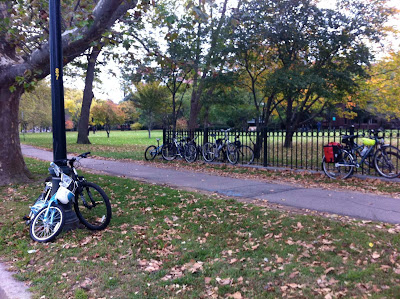