I’m having no end of frustrations with Gilbert's left pedal.

While I love the additional visibility of the flashing Pedalite pedals with the internal generator, I’ve had three pedals fail on the left side.  Inconveniently the pedals are sold only in pairs, and I'm starting to accumulate a large collection of right threaded pedals!
Ever since Gilbert's initial build, it felt like there was a noticeable “wobble” in the left pedal- which was especially noticeable when I’d been riding another bike, and got back on Gilbert.   I looked for a long time for a replacement vintage crank, and then after deciding the ones on ebay were awfully pricy for something that also might be broken (buying other people's problems!), I bought a left reproduction crank.  Unfortunately when it arrived it was poorly made and the cotter pin hole was out of round and too small.  Unfortunately I only realized this after I’d removed the old crank!
Looking at the crank it didn’t seem bent in any way,  and I wondered if having installed it with poor quality cotter pins could have caused the wobble.  I also needed to ride to work the next day, so I reinstalled the crank  with the fancy pantsy cotter, and went ahead and threaded in the brand new pedalite pedal to see how it worked.  I followed the same procedure that I've always done, greasing the threads with Phil's waterproof grease, hand threading it and then hand tightening it with a box wrench.
Unfortunately I had put the crank too close to the bottom bracket, and the crank was hitting the kickstand a tiny bit- just enough to make a tic-tic tic noise.  I tried to remove the kickstand to reposition it, but I couldn't loosen the bolt  and it was getting late, so I hit it with some PB blaster and decided to try it again in the morning.
I couldn’t get it in the morning either, so I decided that I could live with the annoyance, and headed to work.  On the ride home, I noticed the pedal was quite wobbly, so I tried to pedal mostly with the right leg (!)  and limped home.   I tried to remove the crank, only to find that the pedal threads AND the crank threads were completely fubared.    And NO, since you asked I did not force a right pedal on a left crank- I know because I tried that for about 10 seconds, realized my error and got the left pedal.  I used the left pedal,  I didn't use any unnecessary force, and although I understand that crossthreading with steel pedal threads and aluminum cranks is a common cause of damage, this is a steel crank,  and although I can underestimate my strength, I have a hard time believing that I torqued it enough to force it on and do that kind of damage.   I am NOT certain that the crank wasn't previously damaged, but I didn't notice anything unusual when I hand threaded the new pedal on. 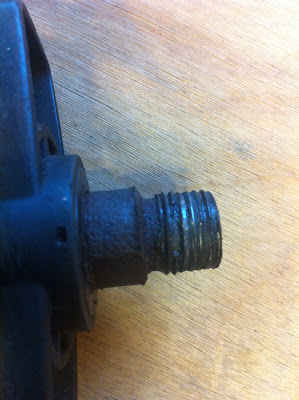 I was lucky to find a replacement left crank in the parts bin at Broadway bikes.  I checked it out against a Raleigh sports that was in the shop for service, and measured it and it seemed the same as the ones I have.  It was stamped L,  and didn’t have the little Sir William etching that mine had, but otherwise seemed identical to the old one. 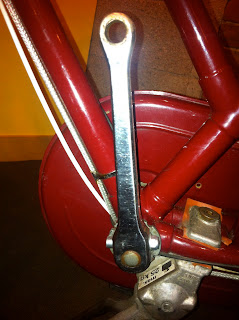 So I replaced the crank, mangling an artisanal cotter pin in the process, making certain to put the crank outboard the same distance as the drive side pedal to duck the kickstand issue (for now).   Since the brand new pedal’s thread was destroyed, I thought I’d put an old rubber block pedal I had on for the moment.
Strangely, these pedals didn’t want to thread onto the crank (yes, I know that seems like a warning sign)  but I did have one of the old pedalite pedals on which the electronics had failed, but the threading seemed fine.  And it screwed  in easily to the crank….

Again, rode off to work, and on the way there, noticed that the pedal was unthreading itself from the crank !!!!  I’ve never had this happen,  and I had tightened it reasonably but not excessively.  I pulled over, and it seemed not only unthreaded but loose, and it looks like the threads are destroyed in the same way the new pedals were!! 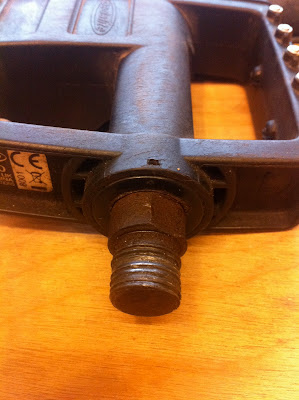 Can't tell for certain, but the threads on the crank look undamaged, or at least less damaged. 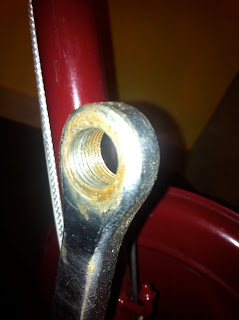 At this point I’m not sure what to do.   I understand that it's fairly standard to have the crank tapped out and use a threaded bushing for a new pedal,  but then I’d have to buy yet another set of new pedals.  Also Harris has the bushings and the tap, but are hesitant to do it to a chromed steel crank.  additionally, I don’t know if it’s possible to cut new smaller threads on the brand new pedal that’s ruined to make it fit somehow with one of those 1/2 to 9/16" adapters?
This is going to sound extreme, but if this new crank has damaged threads, and the new pedal has damaged threads, I’m seriously considering epoxying the pedal into the crank,  and using it until it fails from weather or old age, and then tossing both crank and pedal,  and solving the problem then.  My only concern would be damaging the BB.  And that that point I'd just scrap the damn cottered cranks,  buy a threadless BB bearing and new crankset!
Before I do that I’m going to take Gilbert to Harris and see what they have to say.
Until then any suggestions from the blogosphere?
Posted by cycler at 6:16 PM