A ride in the woods

Last weekend, I was invited to participate in the 2011 version of Apple Picking by Bike.  Cris, silentq, and their friend R  were heading to Nashoba Valley Orchard/ Winery from Arlington.   I had already bought so many farmstand apples that I didn't want to actually pick the apples, but was interested in the ride.
I compromised by riding to the end of the minuteman with them, and then turning around and heading home, with a stop in Arlington heights for lunch with a co-worker. 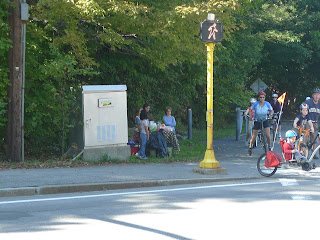 The most fun part of the ride though was after the "terminus" of the Minuteman proper, when we headed out on the "Reformatory Branch"  trail,  which evidently used to be the route to the prison in Concord. 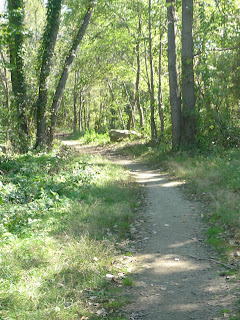 It was a kind of riding that I don't do very often- "off road"  but more like a logging road than a mountain biking singletrack.   I don't think that Gilbert is really equipped for serious off roading, but he handled this lovely path through the woods with aplomb. 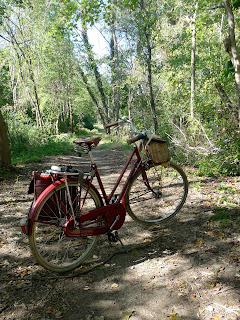 I would love to do more riding like this,  as it was lovely and tranquil.  We saw only a couple of pedestrians, who I believe were neighbors of the trail rather than "through hikers"  and a single pair of bikers, so it didn't have the complications of a MUP. 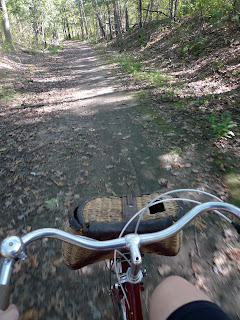 When we hit 62  it seemed like the path ended (subsequent perusal of a map indicated that it continued, but was not well marked)  so I turned around, while the rest went on for apple picking.  It was a glorious day and a wonderful ride, and I was glad that I got to do at least part of the ride.
Posted by cycler at 2:15 PM