Day on a bike

This morning we raked the year's leaves, which even with out tiny backyard ends up filling 15 or so paper leaf bags.  We have a LOT of deciduous trees back there.   We ran out leaf bags mid-rake, so I ran to the hardware store for more, and also got an extra rake- we had one leaf rake and one fixed tine "rake"  which is more for breaking up clods of dirt than raking leaves,  so I thought things would go faster if we had two proper leaf rakes. 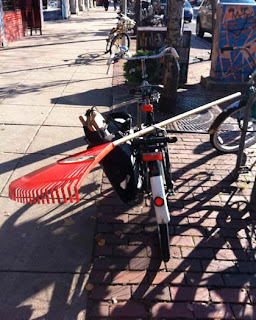 Raking complete, I puttered around the house cleaning a bit, and then made a Home Depot run to get a new snowshovel, some red loctite, and a square bit screwdriver for adjusting our french door, which is rubbing on the jamb.  I also just couldn't resist a giant poinsettia. 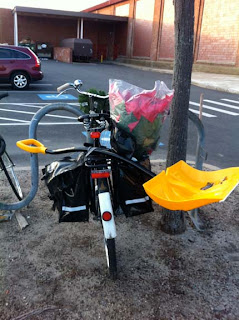 After this photo was taken, I went to Target across the street, and got two grocery bags worth of toiletries, cleaning supplies and and general stuff,  including some solar powered LED Christmas lights for our front yard which has no outlets.
After unloading at home I turned right around and went out to the grocery store- where I got a lot of "stock up" items like flour, canned goods, etc etc.   40lbs of etc- I was a geek enough to weigh it.  Reverse weight weenie I guess.  Velouria posted recently about just how little you need to go on a ride.  My problem isn't what I take with me, as what I bring back!

I've been using these Dutch "Fast Rider" panniers,  of the saddle-bag style a lot lately.  I bought them from Somervillain, some time ago, and didn't use them much because they're too big to sit comfortably on Gilbert's rack, and I wasn't using Minerva much for transport.  Now that I've got her brakes working so well,  I've been riding Minerva a lot, so I dug them out and have been using them when I need XXL carrying capacity.  Somevillain had a system rigged up to semi-permanently attach them to the bike using P-clips, with the idea of leaving them on all the time, as the Dutch do.  But I find that I like to take them off more frequently,  either to move stuff in them inside, or to strip down the bike a bit.  So for now, I've been attaching them with a little strap to the rack.
Posted by cycler at 10:54 PM