In all kinds of unlikely places, (in the comments anyway) I see half facetious suggestions for cyclists to ride carrying weapons, along the theory of "an armed society is a polite society"    I can only imagine the catastrophic consequences of my trying draw and aim  a gun while riding,  or really at all,  so I'll leave that alone,  but today I was packing heat of a different sort: 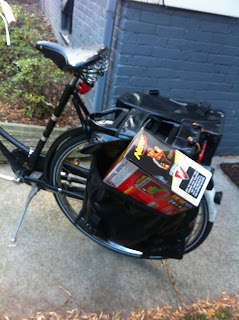 Nerf gun, received in an office gag gift swap,  on its way to Toys for Tots.
The Scientist was sad that it was going away, because he thought it would be cool to play with.  But honestly he'll play with it for a half an hour and then it will just clutter the house, while some 7 year old who might not get any other presents will drive his siblings crazy with it for months :)
Posted by cycler at 1:05 PM