New Year's Eve in Boston was amazingly warm for this time of year- high in the 40's,  damp and overcast.  The Scientist and I took advantage of the warmth to take out his road bike, and my Shogun and ride to the next burb out (Belmont),  an area which we haven't ever explored much, and ride around in a new to us neighborhood.

First we aired up using another one of Christmas bike presents- a Lezyne pump with a thread-on chuck.
While I have no problem with the pumping part, I've always hated the flip levers on most pump heads- it seems like either you whack your fingers on the spokes while trying to flip the lever, or that even after the lever is flipped, you have to wrestle the head off, all the while listening to the leak of air that you just squeezed in there.   So the screw on chuck of the Lezyne is a dream come true for me- so simple! 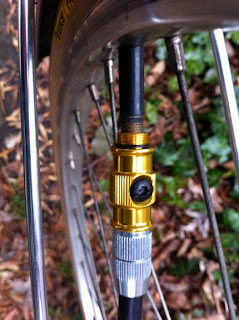 You can unscrew the gold bit from the silver link,  and the first silver link turns freely on the second silver link.  To change from Presta to Schrader, you just unscrew the gold bit, and turn it around.   The "Classic" pump has other nice features, like a wood handle, and substantial alloy feet,  but this screw on chuck is the real selling point in my book.
We rode out to Fresh Pond Reservoir,  and then took the new cycletrack on Concord Ave to the Belmont line. 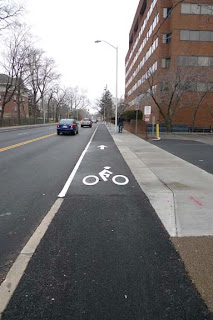 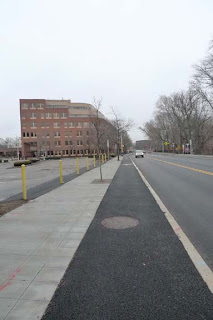 This turns into a bike lane at the Belmont line, and we rode around a bit in the neighborhoods off to the sides of Concord,  just to explore a bit.  We had lunch in Belmont Center, and then did some more serious hill climbing in the neighborhoods between Belmont center and Arlington.  I was glad I took the Shogun, because I would have never made it up those hills on any of my other bikes!  I think that a combination of feeling more comfortable on this bike and riding the (slightly too big for me) DL-1 for the last two months means that I'm ready to raise the saddle another inch or so, to be closer to level with the handlebars. 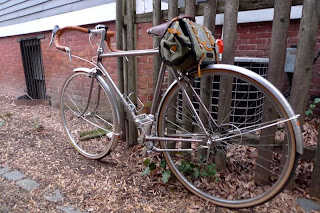 As it is, I think I need to adjust the rear derailleur because it keeps popping out of the lowest gear, which is annoying when climbing a hill.  It also seems to want to switch more than one gear at a go, but that might be my imperfect technique.  First of all I need to figure out how to adjust a derailleur.   I have an old "Bicycling Magazine"  guide to bicycle maintenance  that my Dad gave me years ago.  It's old enough that it probably is about the same vintage technology as the Shogun.  Time to pull it out and figure out how that works.  I have some serious work to do on Gilbert first, (which is why he hasn't been featured on the blog for while now)  which I hope to do in these next early days of the new year.
I wished I'd had a handy reference book as I tried to replace the headlight bulb on the Scientist's car once we got home.   I managed to figure it out, but it's always an adventure the first time on a new (to us) car.  I wanted to get it done before we head out to our yearly appearance at what I call the Nobel NYE party.  It's held at a Nobel Laureate's house (the Scientist's PhD advisor), and the Scientist is always asking me on the way home "how did you like talking to "XXX" - did you know he won a Nobel prize in "XXX"  And here I'd been talking to him about the sweater his wife made him.  Sometimes it's better not to know to whom I'm talking, or I'd be too tongue tied to make conversation :)
It's been an exciting year in biking for me- I've gotten a lot more involved in advocacy in a more official way through the Livable Streets Alliance,  and there are a lot of exciting and challenging projects ahead in the next year.   I'm also looking forward to doing some real touring on the Shogun in 2012.   This year, I finally completed my upgrades of  Minerva the DL-1 from a Sundays-in-the-park bike to a daily rider, capable of carrying just about anything.  As mentioned above, Gilbert is due for a couple of upgrades,  and may get a new higher tech BB and modern crankset as well- continuing in his bionic bike evolution.  So lots to look forward to in 2012!  Hope everyone has a safe New Year's Eve,  and best wishes for great biking in 2012!
Posted by cycler at 7:14 PM