Cambridge recently repaved and re-striped Mass Ave through Central square which is a huge improvement!   Interestingly along much of the distance they striped three lines-  the parking lane, a 18" or so buffer, and what looks like a 5' bike lane.   Where they found the space, I can't say, because the lanes were already pretty narrow.   The idea is to encourage bikers to stay further away from the doors (although if you rode the right of the lane, you'd still be well within the door zone).  Unfortunately this buffer disappears at the cab stand, where it might be most useful and is almost  completely absent on the eastbound side.  I think it's a useful improvement,  I just wish that they could find some way to extend the bike lanes all the way to Trowbridge/ Putnam.  I'm afraid the only way to get real lanes in would be to remove parking though,  which is an issue that Cambridge hasn't really attacked yet. 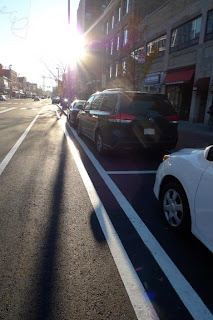 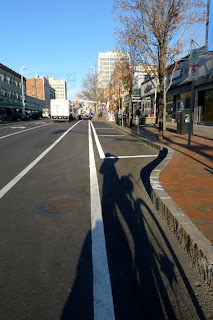 I was riding the Shogun on the Minuteman, and noticed a runner doing a head check before he passed someone who was in front of both of us.  When in turn, I passed him, I slowed and asked him if he ran competitively.  He said "Yes,  why?"  When you run in a dense pack, you learn pretty quickly to do a quick check before you pass someone, to avoid collision with someone coming behind you.
If you just jogged on the MUP by yourself, you might never develop that habit, so he had to have experience running in a pack.  I've also seen a lot more runners with head and/ or tail lights,  which is fantastic when they're using a MUP- makes them much easier to see and makes everyone safer.

Dec 6th is the last day to write a letter in support of the Casey overpass,  send it to John.Romano@dot.state.ma.us.   and he'll get it where it needs to go.  They're going to make a decision on it by Dec 15 I think,  which is amazing turnaround!

Transportation Alternatives in NYC is leading a new initiative to investigate traffic enforcement and accident investigation by the NYPD.  I think that this is very important work, and as I keep repeating here, liability, and holding drivers accountable for negligence is as important, or possibly even more important than infrastructure in creating safer cycling for everyone.

I see this biking family pretty regularly on my route- they look like they're on their way to school in a mini- bike train. 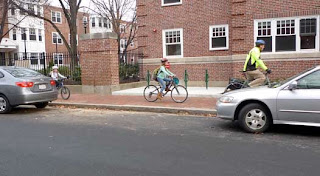 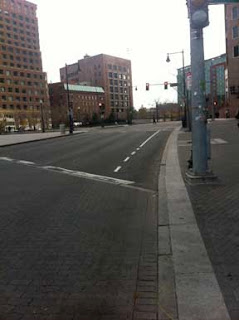 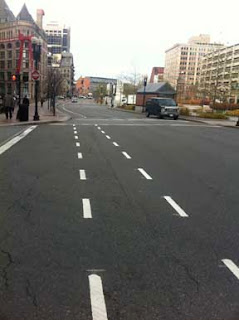 They've been going in in stages over the last couple of weeks, looks like they've gotten as far as my office. will have to ride them soon to see how they work.  Now that Hubway is gone for the season, I don't ride that corridor as much,  but will make a special trip to investigate further 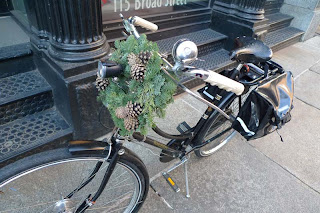 Finally I liked the effect of the wreath I carried home the other day so much that when I saw a mini- wreath for $5, I had to get Minerva her own seasonal decoration.  Held in place with zipties, which sneak between the rod brake rods and the handlebars 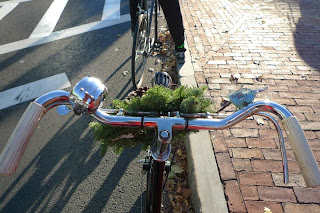 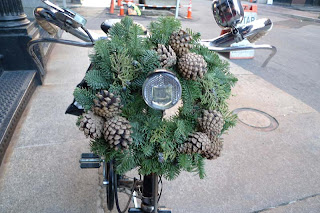 While I was taking these photos outside my office, a construction worker came up to ask if it was a new bike (perhaps thinking that's why I was taking pictures of it :)  ) and he said "I hear those old style bikes are coming back"   You heard right!   I told him that Minerva is actually a lady of a certain age,  but we agreed for a couple of minutes about how great the old heavy duty bikes are-  I said that she's like a Cadillac - she needs a V8 (patting my thigh) to get going, but once she's moving, nothing stops her, and the ride is fabulous.
Posted by cycler at 9:33 AM