I rode home in a bit of rain  a couple of nights ago,  and I'm happy to say that Minerva's hub brake passed with flying colors!  Even the Koolstops on the back weren't doing much of anything, but the hub brake worked flawlessly, even in a pretty consistent drizzle., and then rode in in a bit more rain than I would have liked to ride in.  I wore my butter yellow trenchcoat, and was perfectly dry. 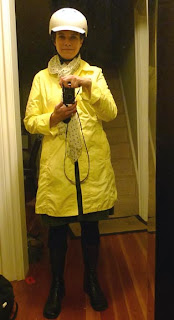 I don't love riding in the dark AND the rain,  and so I turned on every light at my disposal:  Superflash on my helmet,  steady generator taillight, backup blinkie on seat post,  "to see" light (IQ Cyo)  and christmas lights on my bike wreath.  Literally lit up like a Christmas tree.

I can't wrap my head around why anyone would ride without lights, and I saw a couple of them .  I wanted to ask them, in a sincere, non snarky way, why?  Did they forget them, or forget to turn them on?  Have them stolen and haven't replaced them yet?  Feel that they're too expensive?  Do they think they're not effective, or not necessary?
It feels like cyclists tend to divide into three camps.  Arms racers, (who tend towards the stereotype of the "bike commuter" in neon gortex)  who have the latest 1400 lumen Magic Shine, often in seizure inducing flash mode)  Ninjas,  who have nothing,  and the middle ground of citizen cyclists, who have a cheap set of blinkies,  probably don't identify as "cyclists"  and who are just getting from A to B on their bike.

I'm much less likely to ride TO work in the rain, because, as happened yesterday, I have to sit in my clothes if I get wet.  In my defense, it wasn't really raining (just spitting a bit) when I left the house, and I was running late, so I didn't have time to take the T.  I just threw on a shell and hopped on my bike, and got damper as I went along. My wool tights and leather boots are fine, but my cotton skirt got soaked below the hem of my jacket.  Should have pulled the trench coat off the rack instead.

I did however have what I think might be a very useful idea.   I've been flirting with raincapes, including the possibility of making my own out of waxed canvas.   However, they have a sail like tendency,  and I just don't ride in the rain enough to make them useful.  Rain pants seem like too much work, and too hot, and I have to change my clothes to wear them  but what if I made a rain skirt?  Something just below the knee,  full cut to slip over whatever skirt I was wearing,  and with a simple elastic waist to hold it in place. It would self-ventilate like a cape would (to some extent).  I'm really excited about the possibilities of this as something that wouldn't require as much pattern making as a cape, but which would protect me better if I do choose to ride in the rain.

Against my better judgement I'm going to post photos on the internet of the prototype- a drawstring garbage bag, from which I removed the end,  using the drawstring as a waistband. 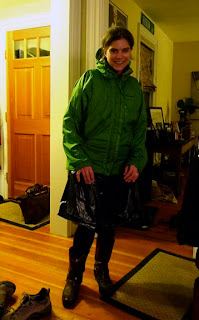 And on a final note,  I stopped at the store tonight for this: 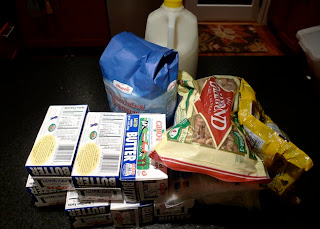 Yes, as a matter of fact that IS 7 pounds of butter.
Let the holiday baking begin!
Posted by cycler at 10:55 AM