At the street talk I went to on Tuesday,  it was announced that the striping on the BU bridge was "imminent".  While striping is highly weather dependent there is a good chance that the new bike lanes will go in next week.   I rode across the bridge on Monday night, and it was wonderful not to have that "shooting the rapids" feeling of taking the lane and pedaling like mad up between the jersey barriers and over the bridge while the car behind you follows with a varying degree of patience.

Having the striping down will be a nice closure on the battle to accommodate bikes on this bridge, which started many years ago, and has really reshaped the way that people think about the bridges and what kind of facilities should be expected on them.  The battle isn't over as we wait for the reconstruction of Longfellow, River, Western and Larz Anderson,  but this is the place it all started, and it's nice to think it's finally coming to fruition.

If the weather holds warm, and dry we'll get the markings before the new year, and Livable Streets is going to celebrate with goodie giveaways on the approaches to the bridge, as well as postcards to thank the head of DOT for this safer new crossing.

In other good news, I hear from the project manager of the Longfellow bridge work that the jersey barriers on the Cambridge side of the Longfellow will be gone, and the bike lane re-opened in a couple of weeks as well.   I don't ride the BU very often,  but the Longfellow is my daily route, and I will be very very relieved not to have to negotiate this closure in the dark any more: 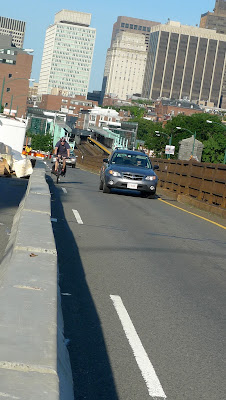