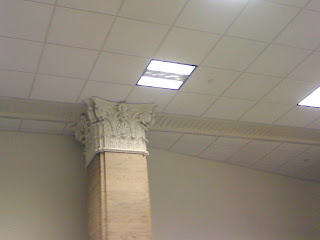 Although I studied at a primarily modern architecture school,  though the vagaires of fate,  I ended up practicing traditional architecture/ historic preservation.
Except in rare cases, generally involving a lot of money or a person with vision (or both)  they really don't build them like they used to.
Which is why something like this (seen at the post office on Milk Street)  makes me sad. I see that art deco /Corinthian capital and  scrap of a beam with a reeded panel peeking out below the ceiling tiles, and
I just know that there's a graceful and detailed cornice above that dropped ceiling with its fluorescent lights.
There were probably once grand lights which hung from rosettes in the ceiling.  And all of it was probably gilded and painted to accentuate the details, before someone painted it a universal beige which doesn't look right with the stone.  Unfortunately when they dropped the ceiling they probably hacked and beat away at the mouldings.  I've seen it before-  moments with a sawsall can do damage that takes a lot of time and money to fix, but the guys who install dropped ceilings are always on a tight budget, therefore in a big hurry.

I doubt anyone but preservationists notice the scraps of the elegance of this lobby while they're waiting to use the automated postage kisok,  but there used to be a time when coming through those big bronze doors was an experience, instead of just another generic space for transacting business.
Posted by cycler at 2:33 PM