Hang up and Drive 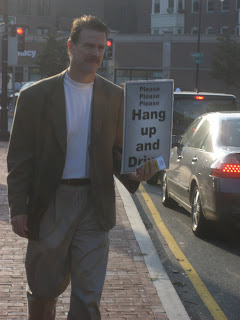 Yesterday and this morning there was a guy standing in the median strip between lanes of traffic at the (horrific) Charles station interchange at the bottom of the Longfelllow bridge.  He was nicely dressed in a sport coat and chinos and was walking back and forth with a sign which said "Please, Please Please, Hang up and Drive" on one side,  and on the other "I'll pay you $1 if you hang up that call"  He actually got a taker,  a woman who was laughing and being a good sport.  The freeway that she had just exited makes me tense to drive on it without distraction (it's narrow and curvy and people drive way too fast and merge like crazy people).  So it might be too little too late for her to hang up now, but better now than before she passes me on the next stretch of road! 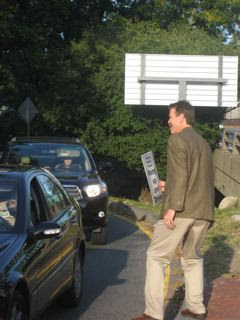 I asked him if there was a story behind his activism and he said that he worked for a non profit called Safe Roads Alliance
and although it was a bit of a publicity stunt, maybe it got people to be a bit sheepish about their phone use instead of just defensive.  Even better, there was a newspaper photographer taking pictures, maybe the organization will get some publicity and people will read about the dangers of driving distracted.

There's a lot of discussion in the transpo-cycling world about how MADD changed public perception of drunk driving from a an almost harmless "who hasn't driven after a few" activity to the sort of thing only a heartless sociopath would do.  There's a need to turn talking on cell phones while driving from a thing "everybody does"  into the kind of thing that no respectable person would admit to doing in polite society.

Although no one wants to be the victim of a distracted driver, pedestrians and cyclists who don't come equipped with airbags and crumple zones are much more vulnerable to the consequences of someone's inattention.
So keep up the good work man!  I hope you give away lots of $1 bills! 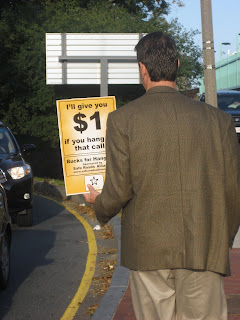 Labels: safety, Seen from the saddle