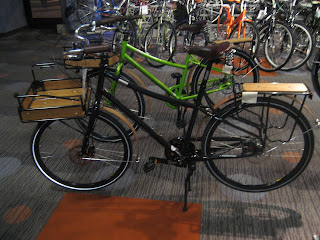 Ducked into Landry's bicycles (a local chain that I think of as focused more on race/ sport bikes)  the other day looking for a new helmet.  I think the guys were a bit surprised when I wheeled my bike right into the store, past the service department and back to the helmet display.  One of them asked where I was going, and I explained that I had a new light that I was worried about getting stolen, and I just wanted to see if they had a specific helmet.

They had it, I bought it, and probably will post more about it later in the week.  But while I was checking out I noticed they had a new line of Civia bikes, the Loring which I had seen online, but not in the flesh.

I really liked the look of the bamboo fenders, and racks.  They evoke a classic woody station wagon.  Between the beefy racks and the double kickstand they seem like they could carry a serious load.  I rode one a lap around the store though (admittedly not ideal conditions) and unfortunately I wasn't impressed with the geometry.  The angle of the seatpost makes you want to sit up straight, but the length of the top tube and the height of the handlebars made me feel like I had to stretch forward.   Not a comfortable combination.

I should probably suspend judgement until I could go on a real ride on a properly adjusted bike, but I'm not sure exactly what the niche for these bikes is.   The salesman was saying that he'd love to sell them to an institution to use as "in house" loaner bikes, and would be willing to offer a discount if you're in the market for such a bike.   They're expensive (the price range of a Pashley, not quite as much as an Azor,) They're stylized in a way that is appealing, although not necessarily my thing.
I'm glad to see more of a market for "utility cycles" though,  and I'm especially impressed that Landry's which does a lot of student business that's not interested in $1500 bikes is trying to promote them.