What I carried-- weekend edition

The Scientist was away all weekend at one of those science conferences, so I was car-free all weekend.
I ran a bunch of errands Saturday morning mainly in East Cambridge and Somerville (Union square).  Although I've figured out a way to Uunion square that's pretty good, thanks in part to help from Filagree from Lovely Bicycle,  once I get there I admit to being flummoxed. Between the intersection of route 16 and roue 60 and the construction that has been going on forever, I threw up my hands and became a pedestrian.  Anyway, I finally made it to Target (where I finally found some of the elusive "Bell Elite" canning jars) stopped in at the fabric store,  dropped by the "regular" grocery for 5 lbs of onions and 5lbs of sugar (and another package of "normal" canning jars- I swear it's becoming an additction)  and then made a final stop at Mayflower Poultry "Live chickens, fresh killed" for 5 pounds of chicken backs and 5 pounds of chicken legs.   I was really impressed with how much the extra weight on the back really evened out the ride.  I often load the front basket and the rear asymmetrically, but today I loaded about 10lbs in each of the panniers, and the ride was SO smooth. I'm guessing that it's  like putting sandbags in the trunk of a rear wheel drive car, but I was surprised how smooth it made the ride. 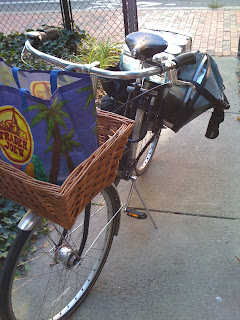 Home for lunch and unloading.  I find that the only really annoying thing about running errands on the bike is what do you do to secure your purchases from stops A, B, and C at stop D?  Then I set out again, this time west to Harris Cyclery in West Newton.  I went mainly down the bike path along the river since it was a lovely day and I was in no hurry.  Although the eastern parts of the bike path are crowded with runners with headphones and families with strollers,  once you get past route 2 it's wonderfully empty of traffic.   I bought the new light I've been coveting forever,  chatted with Elton, and then headed back.  Since I was so far west,  I stopped off at Russo's wholesale produce market, and couldn't resist a giant ornamental cabbage to ornament my front porch. Evidently this was a common impulse this weekend. 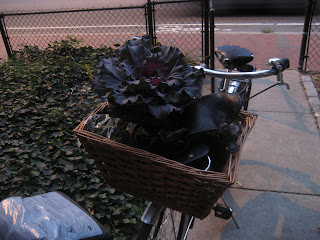 Home again at last, I made  good use of my cleaver, turned the chicken parts into 3 quarts of chicken stock, made a big batch of fig jam, ate some instant polenta with goat cheese and wilted radicchio for dinner  and tumbled into bed, tired but happy.
Posted by cycler at 9:25 PM