Robert is my bike.  He's ethnically dutch but we met in Italy.
I lived and worked in Milan for a year, and although technically my apartment was public transportation accessible, my route to work included a trolley ride (or a long walk) two changes of subway and a walk on the other end.  On the advice of other expats, I went to a notorious flea market where in one section "used" bikes could be found.  OK,  it was probably stolen.  I'm not proud of it now,  but I was poor (my apartment building featured communal squat toilets on each hall)  and having a bike transformed my experience of the city.  Suddenly, not only was my work commute cut in half, but it became a way to relax after a stressful day.  I could get just about anywhere, in a reasonable amount of time,  and I saw areas in the city I never would have known otherwise.

I spent probably $50 to buy him, and probably twice that to ship him back to the USA,  but it was worth every penny.  Until very recently, you couldn't find bikes like him in the USA,  and as anyone who's ridden an European city bike knows, the simple details like enclosed chain case, and upright posture, make it the perfect bike for everyday city riding.

He's a bit of the bionic bike, as I've been slowly replacing parts over the years.  After about a year of commuting I thought about buying one of the fancy new city bikes that are starting to be imported here, but decided, that I like the frame geometry, and I'd just upgrade.  First an 8 speed internal hub gear (that required spreading the rear dropouts (ouch!)  then a dynamo hub,  a longer stem and Nitto Albatross bars, and a brooks saddle were all upgrades. I had to order a new bottom bracket from England,  eventually had to replace the fenders (when one fell off in motion!), and spent much of my recent trip to Spain looking for a Steco rear rack.

This kind of transformation is always a work in progress.  On the current list- the fenders rattle and I need to figure out how to stop that,  and I'm coveting one of the new super bright LED lights. I've also been thinking of a new paint job for a couple of years,  but can never find a time when I can be bike-less for a month or more!


For now: a picture of the gent as is.  He's carrying his most recent load- a 12 pack of quart canning jars, that I need to fill with the  tomatoes filling every surface of my kitchen! 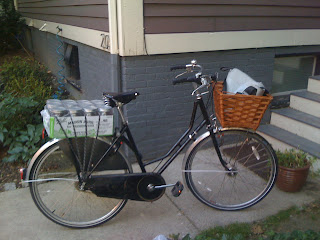