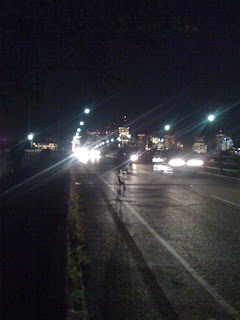 Can you see the bike in this picture?  I barely could, and I was looking for him- imagine if I were a car glancing that way before pulling out into the intersection. Please people, buy a crappy little light if nothing else.  It's less than a pizza at most EMS/ REI type stores.  Even if you don't care about being visible to cars, or your own safety, please do it for the individuals who don't happen to have blinding lights with them (i.e. pedestrians and most bikers).  I had a ninja salmon (riding against traffic) come right at me the other night- scared the bejeezus out of me when he suddenly appeared in my headlight, coming right at me.

Although I understand the appeal blinking lights - they're eye catching- be aware that they make it harder to gauge your oncoming speed because they're not constant.  I use one in really inclement weather to supplement my regular light, but I understand why they don't count as a legal light in most of Europe.

There's also some data to suggest that drunks are actually attracted to blinking lights, so I'm just as happy to avoid that possibility.

Although LED lights have been a huge improvement over the old battery chomping glorified flashlights that used to pass for bike lights, I'm a HUGE fan of dynamo lighting.  I've managed to accumulate quite a collection.   Robert has a built in bracket for a rim dynamo,  which I used in Italy, and which works great and is not much more than a cheapo LED.  However, I upgraded to a hub-dynamo, and it's so low-resistance that I run it all the time.  I don't even notice it's on, and hopefully, like daytime running lights on a car, it makes me just a little bit more visible.