For the Roadster meeting on Saturday I had to take the DL out at dusk and would surely be returning after dark, and needed to do something about lighting.  I received a tail light for Christmas, and want to check out the new 2 watt Blaze from Planet Bike.   However, I decided I'd rather go have coffee with Filigree from Lovely Bicycle instead of trying to rush to REI (over the dreaded BU bridge) in the short time I had before the meeting.  So I improvised. 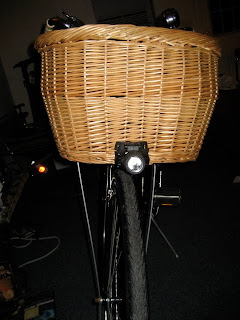 At Home Despot before Christmas I had noticed these little LED lights-  1 watt headlamps for $4.97.  I don't know if they still have them, might have to go back and pick up an extra one.  At that price, they were hard to resist, as my fancy camping headlamp is always hiding from me, and it would be good to have a spare.  When I got it home,  I was pleasantly surprised-  it had normal (pretty darn bright)  super bright, and flashing modes, was easy to open up for battery changes and had a decent headband setup. 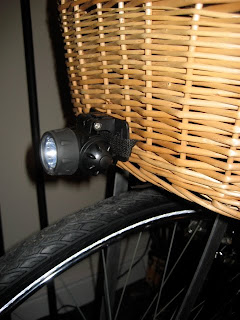 I suppose I just could have strapped the headlight on my helmet and called it a day.  Somervillian had permanently affixed helmet lights fore and aft, and if you had as many bikes to ride as he does, it would make perfect sense.  But when I've tried that before, I haven't been happy with the aiming options and it didn't seem to work well.    So,  I cannibalized the mounting by removing the elastic headband, and then slipped a strap through the weave of the basket, and ran it through the slots where the elastic had been attached. 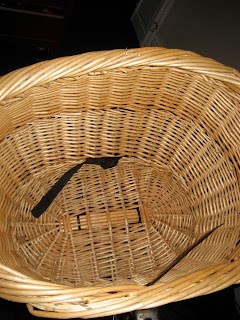 Aside from first attaching it upside down at first, so that it kept slipping down to illuminate my front tire,  it was a simple solution that I thought was pretty darn bright.  Perhaps not the loveliest long term solution, although I have a slightly mangled retro light housing, and I might be able to retrofit it. 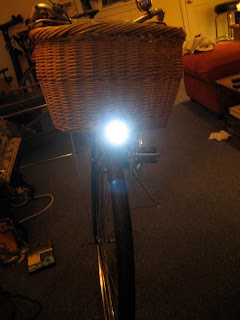 On the way out of the shop I saw an incoming rider with a very very bright front light.  I stopped him and enquired what kind of light he was running- it was the 2 watt Blaze that I'd been interested in, so I can confirm that it's the kind of bright that I've become accustomed to with my Schmidt.