So I caught the part of the weather report that said we would get a dusting of snow today, but I missed when it would start,  so it was a bit of a surprise when I opened the door to see small floating flakes.
The Scientist and I had run an errand together right after work, so my bike was at MIT.  On the drive there, I was trying to decide whether to take the T in from MIT, or bike in.  MIT is about the halfway point of my normal ride, and it didn't seem like it was coming down very hard, so I decided to bike it- deciding that I'd rather be riding through it, than walking through it between the T station and my office.

Within a block, I realized that I needed eye protection.  It was kind of grey and overcast, but I tried my sunglasses and they worked without making it too dark.

I saw several other bikers out- I think that the no-accumulation forecast, made people more willing to try it.  The visibility was kinda blah- I took some extra precautions like wearing my reflective sash, turning on my basket lights and my extra rear light just to make myself a little extra noticeable. 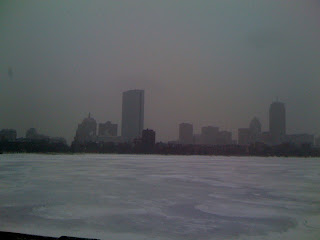 Downtown boston, over the frozen river.  My phone wasn't up to capturing the flakes fluttering around, I'm afraid, but it captures the grey morning light pretty well. 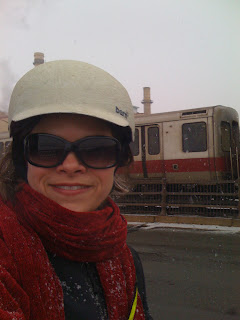 Self portrait with train.  I wonder if anyone was looking out and wondering WTF?  Even though it wasn't coming down too hard, you can see how I was accumulating snow in my scarf.  Better snow than rain, I'll have to say, although rain would help clean the snow out of the frozen bike lanes.