I rode to work this morning, and it was a lovely day- just a few puffy white clouds and in the mid-50's. 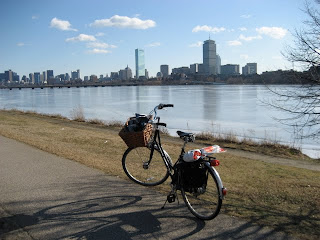 I'm still easing back after my traffic meltdown of Monday, and decided to take the bike path along the Charles river so that there would be minimal traffic issues at least until I had to cross the river.

The ice was mostly gone at Harvard sq, but there was still an almost continuous sheet a little further down.

It was cracking and breaking in lovely geometric forms, and I had to stop myself from spending a lot of time taking pictures. 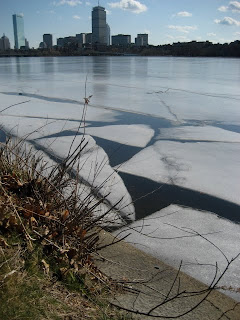 I was tempted to take the bike path home, but I'm a bit leery of biking it after dark.  I don't worry about my personal safety (other than traffic safety) at all biking in neighborhoods,  partly because in most Boston neighborhoods, there's always someone within help-screaming distance.   There's a long stretch of the bike path though that seems pretty deserted this time of year when there aren't many joggers.  Although because there aren't many joggers, a mugger might have to wait for a long time out in the cold before a potential victim arrived,  there are a fair number of marshy areas and bushes that seem like good places to hide.    Anyway,  I don't much care for riding at night in the winter from Longfellow to BU bridge.  I ended up cutting through cambridge to get back to the river (Trader Joe's run) and then I rode on the bike path from TJ to Harvard, where there are more pedestrians.  I was viscerally reminded of the dangers on riding on separated paths though, when I (fortunately) stopped to make sure I wasn't going to get right hooked if I rode into an intersection on a crosswalk.  Good thing I stopped because I would have been a hood ornament for the guy talking on his cell phone.  Different dangers,  and I think I'll take it- just have to be extra careful at the intersections.