I've started using a new coat for my daily ride.  It's a bit warmer than my silvery trench coat, and offers more coverage than my waist length soft shell.  I bought it a couple of years ago at a vintage shop and ended up not wearing it much because it wasn't terribly warm.  It's turned out to be a good weight for riding though-  relatively windproof,  and warm enough once I get going.  Even though it's not reflective,  I also like the fact that it's a bright color for a bit of extra visibility. 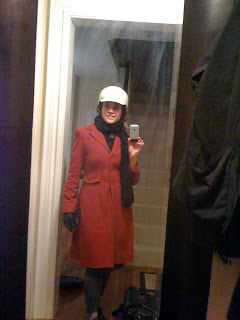 Today I also tried out a pair of wool blend tights that I got at H&M.  Overall it was pretty positive.  Wool tights I've had before tend to be saggy and baggy- no problem with these.  And they did seem significantly warmer than the regular tights I've been wearing the last couple of days.  I don't think I would have dared to wear mary janes (instead of boots) if I hadn't had that extra warmth.
They have a design around the ankle that I'm a bit ambivalent about.  I'm not a big flower print (or pink) girl and  it seemed a bit like they gave me cankles.  Perhaps it was partly because of the proximity with Mary Janes. Just a bit too much going on.   I still will probably go get a set in black that I can always wear with taller boots to cover the flowers if I decide they're too much. 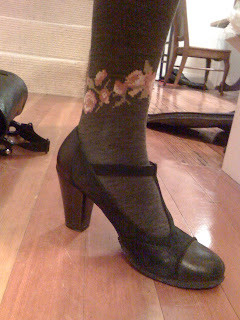 Other than my wardrobe, it was a bit of an eventful day.

Came out of the house to find a cab double parked in the bike land in front of it.  I asked him nicely to move to the open parking spot on the other side of the road.  He refused, rudely, so I called the Cambridge Police.  They said that they could send a car, but that it probably wouldn't get there in time.  They suggested I call the cab company.  I did, and they suggested I call the licensing bureau.  I went ahead and did it, even though he had already left, and I'm skeptical that  it will really make a difference.  I was mad, though,  and it made me feel a bit better.

After that, I biked through Central on my way to work- not my favorite route- it feels like being in a video game, with trucks and buses, and pedestrians springing out from between parked cars, but that's the most convenient dry cleaner, and  I really needed to take some stuff by.

On the errand front,  I also took some knives in to be sharpened.  I try to get them professionally sharpened once a year (in January)  and often it seems that I've done it on the T and felt a little self conscious with a 8" knife in my bag.  Much easier on the bike. Although the knife place had "no bicycle parking" signs on their railing and no place to park nearby which was a bit annoying.

It was super cold this evening- maybe just because it was so windy, but it was a bit of a tough ride home.

One nice thing though was that while stopped at a light, the car next to me rolled down his window to inquire about my headlight and compliment it's brightness.  He said that coming up behind him, he thought it was a motorcycle.