So I decided to try to ride to work today after this weekend's storm.  Although it snowed all weekend we only got about 8", and the streets were pretty clear.  The bike lane outside my house though was a solid iceflow, and although I knew that most of my roads in Cambridge were pretty low traffic, so I could take the lane, I decided not to go my normal route.  Instead I decided to check out what I'd heard about the Charles River path and take the long way to work to see how it was in the snow.   DCR, the state agency which is in charge of the paths, the parks and actually the roads on both sides and across the Charles is not great about plowing the charles paths, and it's a real advocacy issue, especially for people who are coming in from the west and NW and who really don't have any other bike friendly ways to get downtown.
So sometimes they plow, and sometimes they "don't get around to it"  which is almost worse than not ever plowing, because there's always a chance, but you're often disappointed. DCR has had a lot of problems understanding that some people bicycle to get places, not just for fun on a sunny day.  Although I dare say they are finding it out as there has been an active bicycle advocacy voice on a couple of recent DCR projects, including the reconstruction of the dam bridges at the Museum on Science and the BU bridge overhaul.

This year a local running shoe company, New Balance, made a contribution to pay to plow the paths all the way from Watertown to the Museum of Science (about 26 miles round trip).  If anyone from the FCC is listening- yes NB provided me with  a good or service for free- the nicely plowed pathway by which I got to work! 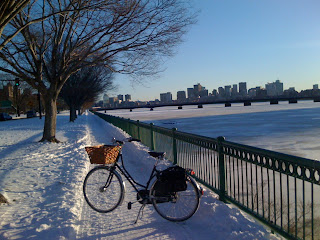 Again, the little streets close to home were the worst- mashed up snow with the consistency of mashed potatoes.   Once I got on the river paths,  it was fairly smooth packed snow, on which I could proceed slowly but fairly steadily.  It was a beautiful morning- clear and crisp with lovely rosy light. 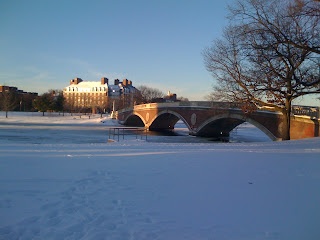 I only saw one set of other bike tracks,  but there were 5 or 6 runners.  And when I got to work, one of my coworkers had biked in as well.  He'd biked via the streets all the way and said it wasn't bad. 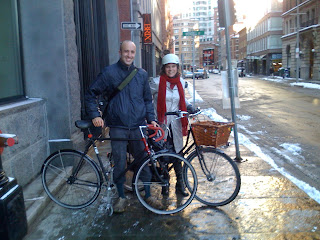 The bikes were covered in salty slush, and our office is carpeted, so we put the bikes on a big piece of cardboard and gave them a bit of a wipedown to get some of the salty grit off them.  I might have to get a bucket of water and give Robert a sluicedown one of these days soon. 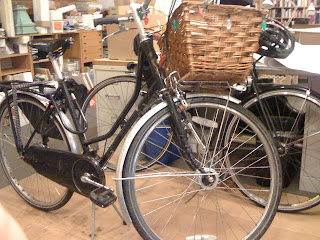