Not your mother's nuggets

Well, actually, if you're my age, these probably were your mother's equivalent of chicken nuggets.
Before there was the nugget, there was the chicken croquette, and that's what I had for dinner last night and they were fabulous! 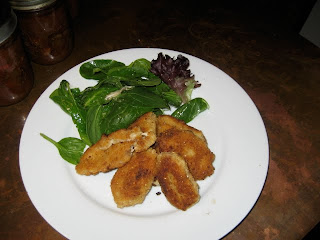 I had a lot of leftover boiled chicken meat from the broth I  canned this weekend, and although the texture of boiled chicken limits what you can do with it, and a lot of the flavor had been extracted into the broth, it seemed a shame to throw it all away.  I picked the best bits out for me, and the fattier bits out for the dog, and ended up with about 4 cups of chicken chunks in the "for me" tupperware.  Some of it became curried chicken salad for lunch, but there's only so much chicken salad I can eat, even when it's curried and mixed with bits of home made fig preserves.  So I thought about other options, and somehow chicken croquettes came to mind.

I'll confess that I came of age in the McNugget era, and I'd actualy never eaten chicken croquettes- and the name evokes the fifties and "Continental" cuisine.  But there's an evocative description of them in Tender at the Bone, by Ruth Reichl,  my all time favorite book about food.  And they use up a lot of chicken bits, so I was in.

The recipe is fairly simple, but somewhat time consuming.

First, make a thick bechamel (white sauce) with 3tbs butter, 1/4 cup flour and 1/2 cup each of milk and broth.
I added a small minced onion and let it sweat in the butter before I added the flour.  Stir the butter (with onions) and flour until it makes a paste, and add the liquid slowly, wisking constantly to try to minimize lumpiness until the sauce is thick.

Once that has cooled a bit, mix it with 1 1/2 cups of minced cooked chicken, a squeeze of lemon, and paprika, nutmeg, salt and pepper to taste (about 1/4 tsp of each)  You could vary it to make curried croquettes, mexican croquettes etc.  So far so good.

Next you form the croquettes,  by taking ping pong ball sized lumps of chicken mixture, rolling them in cracker or bread crumbs,  then rolling that in egg wash (1 egg beaten with 3 tbs water)  then rolling it in crumbs again.  Messy, time consuming,  totally worth it if you want a crispy coating. If you have an 8 year old handy, delegate!
I pan fried them, although you could deep fry them if so inclined.  I formed some of them into flat patties,  and some of them into triangular shaped logs.  I understand that pyramids are the classic shape, but I think you would have to deep fry them, and I wasn't up for the mess tonight.

In short-  This is not a meal that a normal (sane) person would make on a Wednesday night after getting home at 8.  But I did anyway, and BOY were they tasty- crispy outer shell, shattering to reveal an oozing, rich chicken center, delicately flavored with lemon and nutmeg.
I'll never look at nuggets quite the same!

(they were pretty tasty as lunch the next day too!)
Posted by cycler at 9:23 PM