Thanks for everyone who wrote in with support for taking some time off.
When I was walking to the T last night, the wind gusts were so strong they nearly blew me off my feet.  I saw a biker riding into it, and he was barely moving, head down with a bus lurking behind him- it really looked miserable.

On another topic though-  my giant pantry of canned goods was starting to get worn down a bit.
I have plenty of canned tomatoes (although I'm not sure I'll make it to tomato season) and canned peaches and jams,  but the "meals in a jar"  like Chili and Goulash were getting a bit thin.  It's really been enjoyable to get home on a Tuesday night and be able to pull out homemade goulash and have it ready in 5 minutes in the microwave.   It doesn't even have to defrost.

But it felt like it was time to recharge it a bit.  I made a big batch of spaghetti sauce and a big batch of broth this weekend, and hope to make some more bean soup and more goulash next weekend. 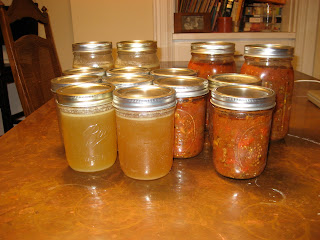