I must be part magpie.
Whenever I see clothing in shiny silver or shiny grey, I have to touch it, and often have to try it on, much to the amusement of my shopping companions.  I had a gunmetal down coat when I first moved up to Boston that I wore until it literally fell apart.  I have a light silver light trench coat that I bought last fall for bicycling.


And now,  for the latest entry in my search for the perfect bicycling coat: 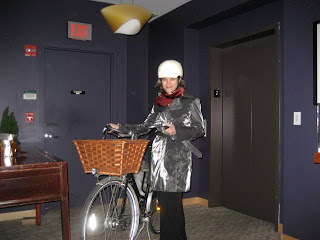 Like most people who bicycle in their regular clothes, I eschew fluorescent colored retro reflective cycling jackets.  I often have to go to meetings wearing my coat, and I'd have to bring a separate jacket to work, which kind of obviates the whole ride in your work clothes philosophy.

On the other hand, a black wool coat isn't the best thing to increase visibility when riding home after dark.  Unfortunately black goes with everything, and consequently I have a lot of black outerwear.  I compromise by wearing a retroreflective sash over black coats, but inevitably I have to shed a layer mid-ride and end up struggling with the sash and the coat all tangled up.

So a reflective grey/ silver coat would seem to be the perfect thing.  It's reasonably sober in daylight, therefore appropriate with regular clothes,  it goes with a wide variety of other colors like black does,  and when hit with a headlight's beam, it clearly is a human body. 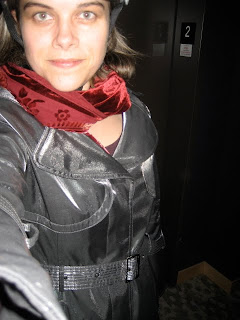 The Scientist said when I tried it on that it looked like something from the matrix, but that it would be fine for riding in.  I like a good belted trench though, it's a classic look, which helps ground the shiny-ness (I hope).

My last silvery coat hasn't been all I hoped it would be.  I'm not crazy about the peter pan collar,the fit is kind of baggy and the lining is shredded at the sleeves already from being removed at stop lights a couple of times.  I've always meant to alter the collar and nip in the waist or belt it, but have never gotten around to it.  I'm hopeful that this one seems a little more substantial, and although it's not super warm, it seems heavier than the other one.

So far I have only two drawbacks.  The first is that it has buttons, which are hard to undo in motion.

The second, and this is a bit of an odd thing, is that unlike a retroreflective fabric- this fabric is sort of peripherally reflective,  which means that I keep getting reflections in the corner of my eye that are caused by streetlights ahead of me bouncing off the sleeves, making me think that there's a car's headlights coming up from behind.  It happened several times that I thought someone was right behind me,  so it's a pretty strong effect.  We'll see if I get used to it.