So,  For the LGRAB Summer Games,  I really really wanted to ride a fixie.  We got home late Saturday from NYC,  and spent most of the morning Sunday installing the Scientist's birthday present- a replacement min-fridge for the one in the basement mini-bar that crapped out a month after we moved in.  Unfortunately the new one was ever so slightly larger than the old one, and it turned into a PROJECT.

So it took a bit longer than expected before it was installed and happily filled with diet Pepsi. I headed out to Harris to pick up the honey B66S saddle that I'd ordered for Gilbert.  While I was there, I thought I'd try to ride something fun.  My first choice was a Betty Foy.  I wonder sometimes just how fast I could be if I weren't riding a 40 pound bike.  I thought that I might take a spin on something a bit more nimble and see if that was something I could get excited about.  Unfortunately no Betty Foys on the floor this late Sunday just before closing.
I eyed the fixies, but was just too intimidated to do a rushed test.  Then, out of a corner of my eye, I espied the perfect thing- a Brompton!
Every time I see Elton's tricked out Brompton parked at Harris, I flirt with the idea of a folding bike.  Unfortunately necessity hasn't driven me that direction,  and the price tag ($1,300 to start) has put me off,  but I'm definitely curious about them,  and I decided to check one out just to see what it was like. 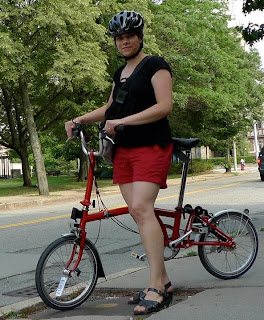 One of the guys I don't know there (maybe he's new,  maybe I just haven't had a chance to meet him before) unfolded one, and pointed me to the test helmets.  Unfortunately it was too close to closing, and since I wasn't really buying, I didn't make him help me adjust the handlebars, and I felt like I was having to reach WAY out in front of me to reach them. 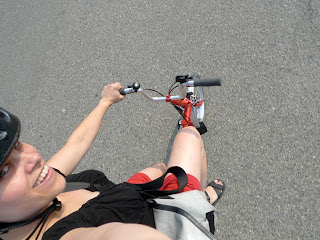 I took a quick spin down a couple of blocks and back, and, ummm, I don't think I need a Brompton,  at least not at this point in my life.

It could have been the handlebars, but the steering was WAY more responsive than I am used to, and I felt like I was going to tip over at the least provocation.  And yes,  I rode a road bike all through college and high school and it seemed much more aggressive than that.   Again, I think it was partly the mis-adjusted handlebars, but still- very aggressive steering.
Otherwise,  it was fine.  It had a surprising amount of get up and go for such small wheels, and the gear shifting was smooth and controlled ( I rode the 3 speed IGH,  there is also a derailleur model).   Brakes seemed fine, although I didn't challenge them.   Overall I did have a bit of top-heaviness in the balance, which is to be expected, as the small wheels bring the center of gravity way down.  It felt like a solid, well built bicycle. 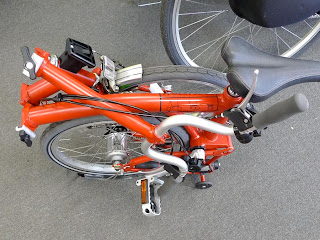 After I brought it "home"  I spent a while trying to figure out the folding mechanism on my own.  I had had the interesting experience of watching a Brompton rep do it (at Harris) in English the week before I went to Spain, and then watching another Brompton rep do it in Spanish while I was in a shop in Barcelona.   I managed to figure it mostly out on the 2nd try, and it is a pretty marvelous piece of engineering!  Like mechanical origami.

If I had no bike storage at home,  no bike storage at work, or had to take the train as part of my commute (was coming in from the far burbs for example)  I would definitely consider a folder,  but as an everyday bike I'm not convinced.  Admittedly my test ride was far from perfect, and I'd love to give it a better run,  but so far, my need for a tiny bike is not enough to overcome the obstacles.
Posted by cycler at 10:36 PM