Bike Geeks of the world Unite!

It is with interest that I have read about the successful bike boycott of a Trader Joe's in LA.
The Trader Joe's in my neighborhood has a primary bike rack of 10 or so staple racks, and a backup bike rack that's one of those wheel only jobbies.   The racks are always crowded, and I have seen some pretty cool bikes there.  Today as I was locking up, I not only noticed a dramatically different bike,  I noticed a guy seriously examining it in the kind of way only a bike geek like me would do. 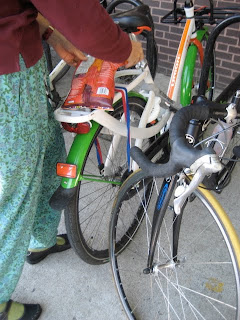 The two of us checked it out for a couple of minutes, and then it's owner arrived.  It's a little awkward to be slobbering all over someone's bike when they show up to claim it, but she was good natured about it.
It's a dutch bike, and the owner won it as a door prize at a work event when she was in the netherlands. 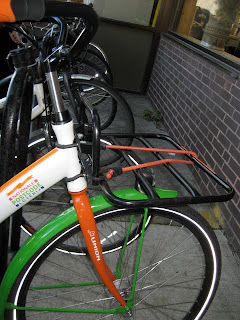 To be perfectly honest,  I think it's the Dutch equivalent of a Bike Shaped Object.  It has this kind of odd rear rack integrated with the frame, and kind of silly flourishes.  The important difference between a Dutch BSO and a US BSO is that the dutch bike comes equipped with heavy duty "pickup" front rack,  full fenders,  dynamo lighting and a chainguard.  And it will probably last 20 years. 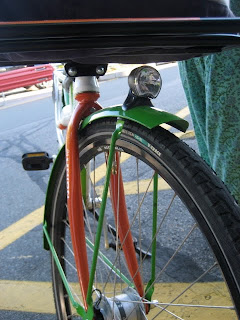 Cool fender mounted dynamo powered light.
The other bike geek and I chatted a bit more about bikes.  I admired his DIY rear rack and he admired Gilbert's creel basket, and we chatted a bit about IGH hubs.  After I came back out of the store, I took a couple of pictures of his setup- a classic home brew customization job that fits him perfectly using off the shelf parts.  It has no aesthetic pretensions, but it does exactly what he needs it to do. 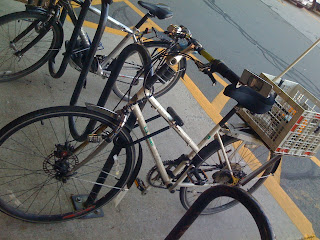 Front and rear disk brakes, "to be seen" and "to see" dual light setup with battery pack and planet bike blinkie. 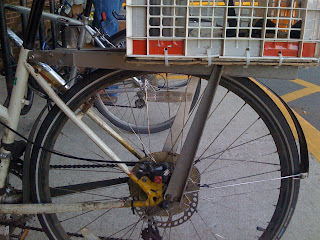 DIY rear rack-  you could carry 75 pounds on this rack easy.  Looks like a handmade fender as well, although we didn't discuss it.  Gilbert is jealous about how dead level this rack is.. 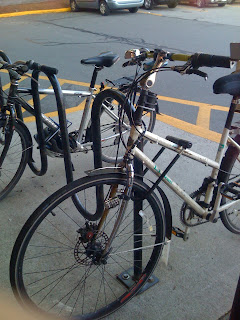 I don't know exactly how to describe the stem-  it looks like it was put in backwards on purpose to achieve a more upright riding style with the straight mountain style handlebars.
Oh,  I also saw the same bike I blogged yesterday in the TJ's rack this evening. Small world!
Posted by cycler at 10:03 PM