The good with the bad

There must have been a wave of jerky driving out there Wednesday  (Maybe it's like wearing white, you do it after Memorial day!)
Dottie, from Let's Go Ride a Bike, got harassed by a Land Rover driving overgrown frat boy, and I got harassed by a grey haired lady driving a  Prius.  I was in the left lane, about half a block before making a left turn, when the prius squeezed through the space between me and a bus in order to get to the red light 10 seconds before I did.  When I politely pointed out to her at the light that she had really scared me, she yelled at me that I needed to stay on the right.  I pointed out that I was about to turn left, and she accused me of holding up traffic ( I was moving at the same speed as the bus was..)  Anyway things deteriorated, and things got heated, and although it didn't end up in profanity, I was upset and rattled.  Things like that tend to stick with me for longer than they should.

Thursday morning though, I observed an anomoly- a polite and bike respecting cabbie!  I was taking the lane through a complicated intersection, and kept it,  as I headed up Cambridge street.   A cabbie started to pass me, moving into the 2nd lane and giving me a good 5 feet of space.  All of a sudden a fare steps out and hails him ahead on the right.  He starts to move over,  and I saw him check his mirror and decide he didn't have space to pass me.  So he hit his brakes in the middle of both lanes, and stopped and waited for me to pass him before he swooped in to collect the fare.  About a block later, I thought - I should have said something to acknowledge his good behavior.  There is so much animosity between bikers and cabbies, that it would be nice to give positive feedback when it's deserved.

Last night, the Scientist and I met up with Charlotte  from Chic Cyclists and her husband A.  We're doing some "research" for a potential Cocktail ride (stay posted for details).  The service was awful, but the drinks were good, and we were having such a good time chatting, that it was hard to mind too much that we never got to order food.
Although it feels like we've known each other for years through the blogosphere, we've not spent much time actually sitting and chatting, so it was great to have an extended time to get to know each other.

On the way over I was running a bit early (for once), and took a different route to Back Bay from my work.
There was this cool information kiosk that was about the reclamation of the back bay- how it was turned from a marsh to an urban center through the importation of thousands of tons of gravel.  You'd never see it if you were whizzing by in a car. 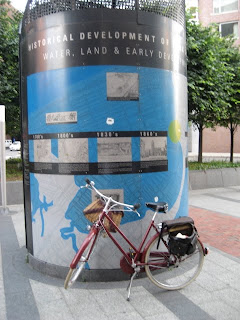 Next, I stopped off at Trinity Church.  H.H. Richardson is probably my favorite Architect, and I consider myself lucky to live in a place where there are so many of his works.   I love the contrast of the muscular proportions of the massing, and the delicate carving of the details. 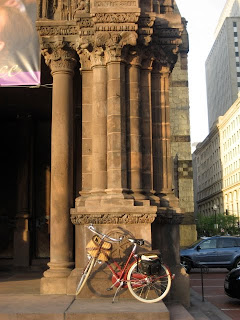 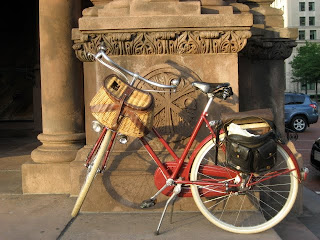 One of the major perks of biking in Boston is that it's so much easier to park your bike than your car.  We actually had a bit of a problem finding parking at the Pru,  but all we had to do was walk a half a block to find an un-occupied signpost.  Much better than paying $20 or circling for 20 minutes to find a car parking spot! 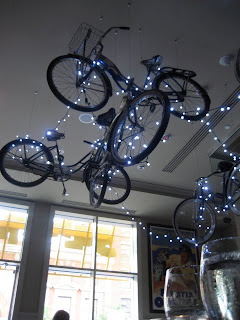 I so much enjoyed my French "77"  (kind of like a French 75)  that I decided to try to make my own tonight.  I had some sparkling lemonade left over from the tweed ride picnic.  I mixed that with some gewurtztramener, and added a tiny dash of gin for some bitterness.  Tasty!

Finally, I accidentally broke one of the connectors on my lighting wires.  On Wednesday night I was a ninja!  I felt so vulnerable- it was awful- I can't imagine why people would do it on purpose.
I rode home along the bike path to avoid as much traffic as possible- unfortunately that meant riding in the deep dark for most of the way- full of roots and potholes.  I really continue to love my Edeluxe, and how much it works "to see" not just "to be seen".
Posted by cycler at 8:02 AM