What I carried, omnibus edition

Did a lot of schlepping on the bike this week- thought I'd just combine pictures in one post.  I do most of our grocery shopping, and although every couple of weeks I'll borrow the car for a big run of heavy stuff,  by necessity, I carry most of our food home on the bike.

Indian Food on Tuesday:  The Scientist had a tough day, so I stopped and got his favorite- takeout Indian food. 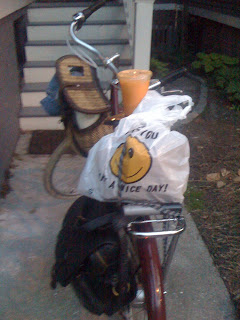 I had to carry the Mango Lassi in my hand and ride one-handed- the lid just wasn't going to stay on if I put it in a basket or bag.  I need a coffee holder!
I also stopped and got a quart of milk and some sundries at the grocery store next to the Indian place. 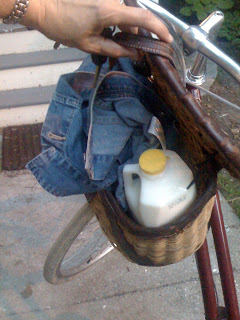 Thursday was the second pickup for our CSA-and I brought home a pannier bulging with (mostly) green things .  The Haul this week: 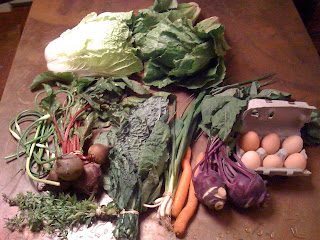 From top left:  Napa Cabbage (destined to be KimChee) two heads of Romaine (Caeser Salad anyone?) fresh eggs (Caesar salad)  Two Kolrabi (Kim chee?)  two carrots,  green onions, Dinosaur Kale,  Beets, Oregano and garlic scapes.
Friday  at lunch,  I went to the North End,  the Italian district of Boston,   mainly because there's a hardware store there with a lot of canning supplies.  They didn't have the Bell Elite jars I was looking for, but I bought these short jars that will work fine. 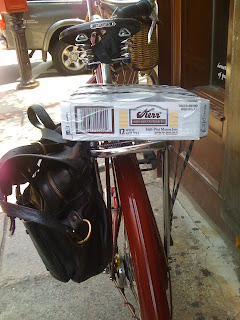 On the way home from work, I went to the Haymarket wholesale produce market with my co-worker E.  with the intention of buying only a giant bag of lemons.  It's starting to get hot, and nothing is as cooling as a giant glass of lemonade.   As always happens, instead I ended up getting a pannier full of bargains. 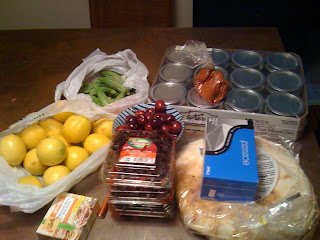 Canning jars (to be filled with Strawberry Jam tomorrow).  Pita bread and sweet paprika from the Halal market next to the haymarket.  Three packages of Blackberries (slightly beat up from the trip home, but 3 for $2, can't be beat).  Sugar free pectin for the strawberry jam.  A pound of Cherries, 18 Lemons (6 for a dollar) and a pound of Okra.  Oh, and a box of envelopes I picked up at the hardware store while I was buying canning jars.
That's a lot of stuff, and my fridge is full to bursting with all the good stuff.    To the point that things leap out at you when you open the door incautiously.  Maybe I should make a policy, that if it jumps out at you, you need to eat it immediately.  Might not work so well if the butter escapes its box.
I love doing the CSA,  but it can be a lot of food, and it takes some discipline to use it all.  I've developed a strategy that is to immediately process it as much as possible instead of pushing it into the back of the fridge where it has a chance to be forgotten.  I spend a couple of hours every summer weekend "turning vegetables into food." For example: if the spinach/ beet greens/ turnip greens  are already wilted with garlic and olive oil,  I can easily take them to work, toss them in a pasta,  serve them alongside grilled sausages etc. etc.
If I peel and grate the carrots, I have a better chance of making them into Moroccan carrot salad (carrots, lemon juice, garlic, olive oil, salt, cumin, paprika- oh MY it was tasty!) instead of leaving them to languish in the crisper drawer.
I think I need to not bring anything more edible home though until we get a handle on the stuff we have!
Posted by cycler at 10:20 PM