I'm a bit late in getting to my summary of Monday's tweed ride.
As has been widely reported, the weather was lovely (if a bit smoky) and fabulous bicycles and costumes were in abundance.

I spent WAY too much time looking for the perfect outfit.  I hit 4 vintage and used clothing shops, H&M (twice) and a variety of discount stores.  I bought lots of options, and finally put together a combination that I liked a lot.  I wanted it to be tweedy but not hot and heavy wool,  and I was going for something Gibson Girl-ish.  Technically earlier than the heydey of 3 speed clubs, but definitely associated with bicycles.   I found some great information on the "Society for Rational Dress"  who advocated split skirts and "Tailored Suits" that would allow women to bicycle and exercise while providing modest coverage.  I also learned more than I wanted to about what corsets did to women's skeletons and organs.

So, corsetless, in a long linen tweedy skirt (used, Eileen Fisher), a puffed sleeve blouse and cinched belt (H&M) elbow length gloves (vintage) and a straw hat (used, added the feathers that I got at a fabric store)
I met up with E from work, and Somervillan from Boston Retro Wheelmen at my house, and we rode along the river to the meeting point, drawing curious glances from passersby.  Once we arrived, there was plenty of time to chat with others, admire their costumes and bikes and generally killed time waiting for things to start. 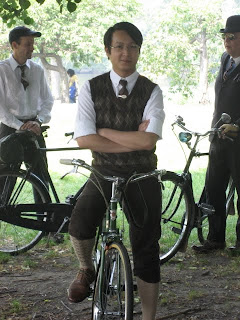 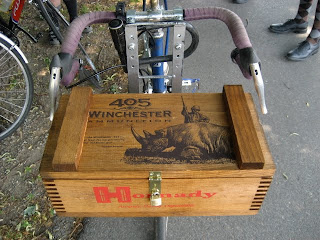 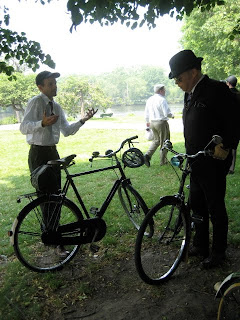 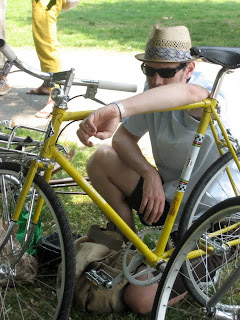 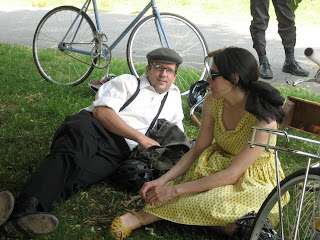 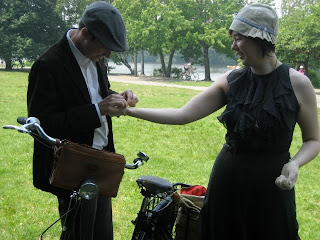 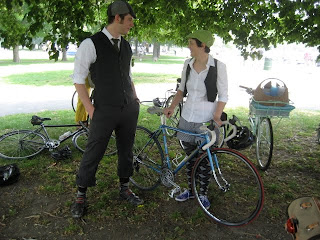 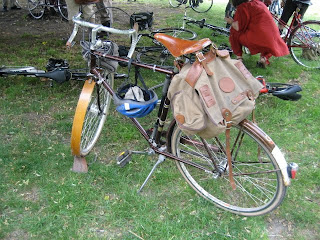 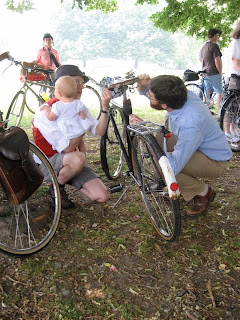 Once we got on the road though things were generally fine.  We observed all the lights, so we got chopped up into several groups fairly quickly, but Vin and Ed from Cambridge Used Bicycles were kind enough to be the sweepers, carrying many pounds of tools just in case of mechanical  complications, and making sure that no-one got lost or left behind.  Vin even brought a floor pump! 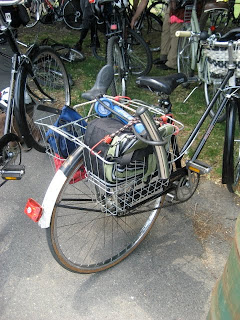 The route went through Harvard square,  along Mt. Auburn/ Mass Ave/ Main st, across the Longfellow, up and around the pedestrian overpass,  stop for pictures at the Hatch Shell,  across another Ped overpass,  around the public garden and down Comm Ave (on the new bike lanes!)

We stopped for refreshments at Old Sully's on Comm Ave and Harvard Street.  Fortunately we were practically the only ones there, because despite people peeling off, we were still 30-40 people.
After that, we headed mostly straight back to the starting place. We met a 20 person fixie gang who wanted us to come and take some pictures for a photo project they were doing- but since we were the sweep group, we didn't feel like we should be too delayed.  We encouraged them to join us, but they had somewhere they had to be too.  Could have been fun though.

Back at the starting point, I was joined by the Scientist with a full picnic hamper.  The Cucumber sandwiches were pretty lousy (they needed better bread)  but the hamburgers were tasty, and it was great to unwind with a beer and some more bike conversation.  A good time had by all!
Posted by cycler at 7:54 AM