Gilbert pretends to be a truck

Went to Home Depot today, mid fence install (the ever-lasting fence install that will not end...)  to get longer screws.  This is a pretty short ride, about 2 1/2 miles, and I often make it by bike if I'm not planning on carrying something bulky.

However when I got there, I discovered that they had a lot of their common perennials on sale really cheap.  I decided what the hey,  it's such a good deal, I bet I can get them home... 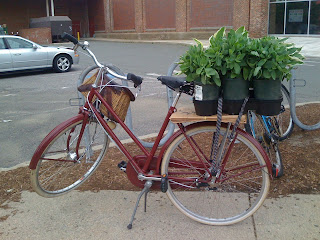 I scrounged up three of the plastic trays that the plants were shipped in, and nested them so they'd be a bit stiffer.  Then I used my handy rack straps to fasten the trays down.  Stuck in the plants, twisting them to get them as stuck in there as possible. 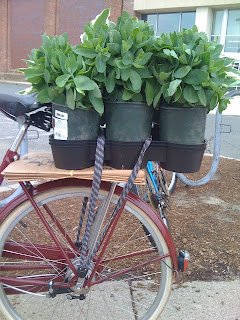 Three Autumn Joy Sedums (three varigated hostas on the other side..) 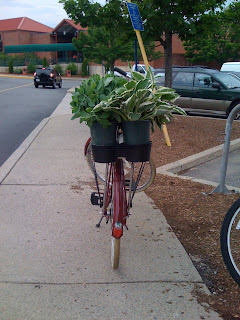 There were a couple of incidents on the way home where I hit a bump, and a plant did a header, but they all survived more or less intact.  I went really slowly and tried not to hit any bumps.  All in all a successful trip!
Posted by cycler at 5:23 PM