In my household Fried Rice and pizza are the great fridge emptiers.  They're a great way to use up little dabs of savory stuff that aren't quite enough for a meal. 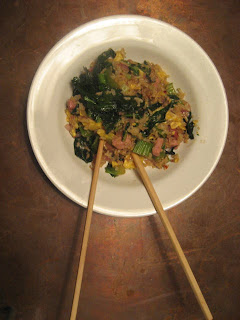 This night's entree was a bit more of a fridge emptier than a freezer emptier, but it did use up the last third of a ham steak that I had bought for making soup and whose remainder had gotten stashed away in the freezer.  Also part of a serving of brown rice, removed from the freezer to serve with something else a couple of days ago.

First I cooked a batch of bok Choi leftover from last week's CSA.   I love the clean green sweetness of bok choi-  much better than Kale...

Next I put a couple of Tbs of oil in the skillet and added a tiny onion, chopped fine and some red pepper and garlic.  After the onions were cooked through I added approx 2 c of brown rice, and let it cook until it was getting crunchy, stirring occasionally and checking my email to give it time to brown.

Once that was done I added some of the bok choi,  the chopped ham, some leftover scrambled eggs and a couple of Tbs of soy sauce.