What I wore/ bike ambassadorship

Ok, so I was over optimistic about the weather today.  I had woken up in the middle of the night and had to open the window because it was so warm (I like it cold when I sleep).
So this morning I decided to go bare legged. 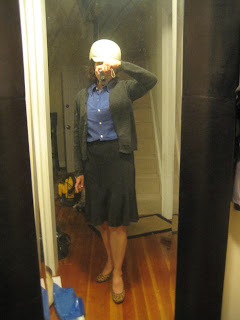 I was fine riding into work, but after dark in the cold riding home I not only was glad that I had grabbed my work sweater, I was lamenting not having my gloves.  Despite the cold, I stopped at the new Cambridge main library (architectural thoughts coming soon)  to return my 1 week books.
As I was locking up, a distinguished looking Indian gentleman approached me and asked if I could ride year round.  I said that I mostly could, but that  I didn't when there was ice and bad snow.  He asked if it was safe and I said that I was very careful and that I found drivers in Cambridge to be used to looking for bikes.

He said that his doctor was encouraging him to ride, and asked if I knew where he could buy a bike for under $400.  I told him that for less than $200 he could buy a great sturdy vintage bike that he could ride in normal clothes.  He seemed interested, and remarked that when he was younger in India, he had ridden a bike and his wife had had a bike like mine that she would ride in her sari.  He said they used to ride two miles to go to the movies.  It was a great image, and I can imagine them on a great matched pair of bikes like the his-n-hers superbes.

He asked me again for directions to Cambridge Used bikes, so I hope he will follow up and get riding again.
Posted by cycler at 9:22 PM