Last night I went with a co-worker to the annual Boston Halloween bike ride.  I was feeling a bit overwhelmed and probably wouldn't have had the energy to put together a costume and haul myself out to JP if I hadn't told her I'd go,  but in retrospect, I'm really glad I did- it was a great experience.  People had spent a lot of time on their costumes, and unfortunately since I was a bit late, I didn't have enough time at the start to take pictures, so my pictures are all a bit subpar- taken in motion.  I'll put a few here, and the rest on Flickr.  It was an amazing event- it was incredible to see the sea of blinking red lights in front of me- I'd guess there were over 300 people.

I went as the wicked witch of the west.  I get enough comments on a day to day basis- something about the basket makes people think of it- don't know why.  Elmira Gulch actually had a wire basket in front- very messenger chic of her..
Since I rode over with a couple of Europeans who weren't familiar with the Wizard of Oz, they didn't understand why people kept calling out the "theme song" as we passed-  it's clearly a very recognizable character-.  It always makes me a bit sad that that character is what people think of when they see a bike.

Anyway- my outfit:
I built a hat out of poster board on my helmet.  It looked good but was like wearing a sail on my head.  I was almost airborne going over the mass ave bridge.  Which might have been appropriate, but not much fun!  I'm afraid I might have green face paint in my ears still. 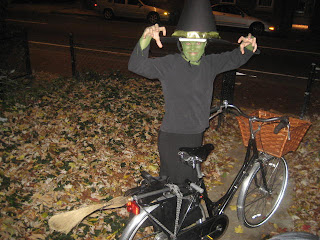 Unfortunately this doesn't show my hat very well-  Here's a bit better one-  the Scientist caught me as I was filling the dog's water bowl. 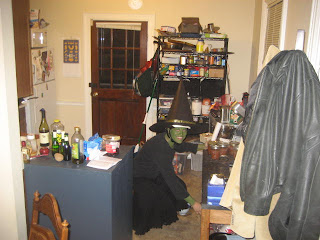 I had three favorite costumes at the ride were a lobsterman riding a lobster,  a tandem dressed as a syringe of swine flu vaccine,  and a dolphin.  The dolphin was an amazing construction of fiberglass- a really serious investment of time. The best part of it was that the tail was mounted on a hinge at the back of the seatpost, and between the rear wheel and the tail there was an eccentric wheel which caused the tail to flap up and down as he pedaled.  Unfortunately I never did get a decent shot of it. 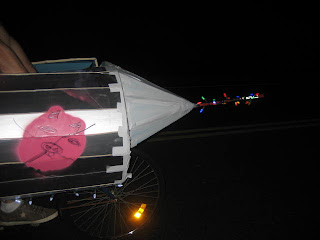 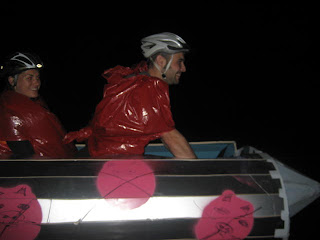 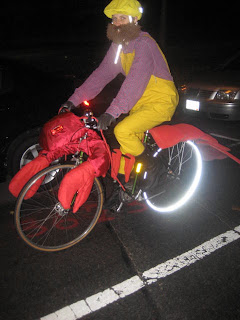 Lots more photos, including a sultan, a chickenman, a guy wearing a lacy dress pulling a trailer with a giant skull and a double bass,   a disco bike and more at flickr
Posted by cycler at 1:48 PM