I bike to the Farmer's market every week along the Greenway.  Everyone from Boston knows the history of the greenway but others might not.  I-93 was slammed through the middle of downtown in the 50's, destroying a lot of working class neighborhoods in the name of gentrification and rapid transport,  and separating downtown from the waterfront with a noisy, ugly elevated freeway and the no-mans land below it.   In the 90's they started the infamous "Big Dig"  which created a new bridge from the north, put 4 miles of road underground, and created a new tunnel out to the airport and East Boston.  It was a long and incredibly expensive process, and in the end they got the greenway where the freeway used to be.

It's still controversial that they didn't build buildings, or attractions on this "new" land.  And I will say that there are parts of the greenway that feel like an overgrown median between two busy arterials.  However, they have some neat play areas for kids (like a flush fountain)  some nice seating for office workers to escape to on a nice day,  and they're trying to encourage food carts, carousels, concerts, fairs and other things that will draw people to the new space.  And mostly I think it's working, and will work more in the future as people incorporate it into their routines.

Technically you're not supposed to ride your bike on the greenway,  which is really stupid, and I take the risk of a ticket and ignore it.   I understand that they don't want people zipping though at speed, but I see no reason not to slowly and courteously bike along the path.  I've ridden on the arterials on each side,  and it's not so bad, but it's not much fun either.  Mostly I ride along the edges, staying on the paved paths or sidewalks.  This week, in keeping with the Greenway LGRAB event, I rode in on the gravel paths and explored the plantings a bit.

They are really spectacular-  designed and maintained by the Mass Horticultural Society,  they have a really wonderful balance of textures and colors.  They did a lot of banking and vertical planting that really reduces the impact of the busy roads on either side. 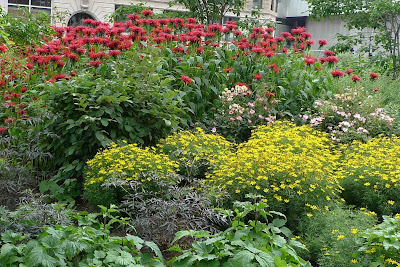 They also did a lot with diagonal and winding paths to reduce the linear "chute" feeling of the park.  The blind corner creates a sense of mystery that draws you forward. 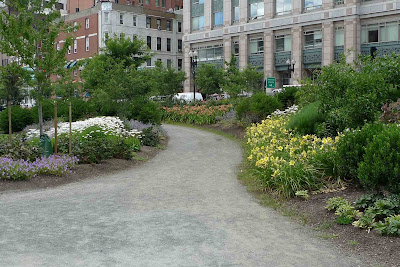 The gardens provide a wonderful place to sit and eat your lunch- shielded from the traffic noise by the lush plantings. 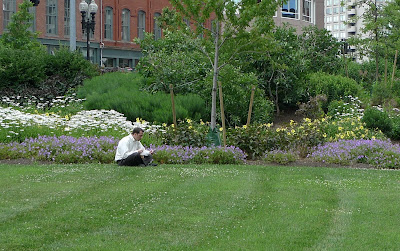 Huchera-  Coral Bells,  one of my favorites in my own garden. 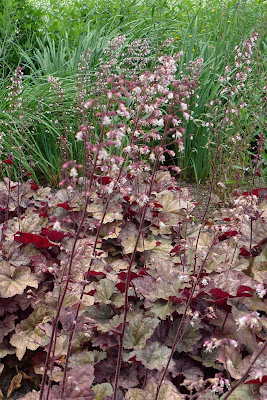 At South Station (the main train station)  there's a plaza where the farmer's market is held in the summer
There's a vegetarian/vegan food truck (Clover food lab) with wonderful sandwiches and a grassy lawn on which to sit while you eat. 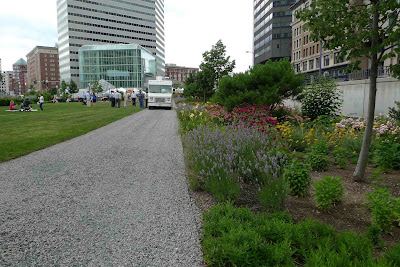 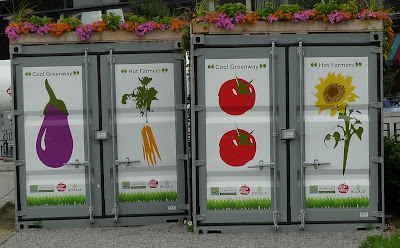 Red Fire Farms CSA has a pickup spot at their booth at the market, which is where I got this week's goodies  (Zucchini!)  I like having my pickup at a market stall, because if I want to supplement with some extra tomatoes, or a couple of heads of garlic I can easily just pick them up. 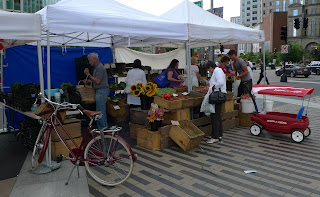 And home with a pannier full of veggies I went!
Posted by cycler at 1:04 PM