On the Other Side

The Charles River divides Cambridge on the N-NW side (left bank) from Boston on the S-SE side.  There are parallel multi-purpose  paths on each side, and an arterial multi-lane road on each side.  There are 9 bridges in the 5 miles or so of  the "lower Charles":   From Ocean inward:  Museum of Science bridge,  Longfellow, Mass Ave (for some reason called the Harvard Bridge),  the BU bridge,  River street, Western Ave, Larz Anderson (footbridge)  JFK,  and Elliot. 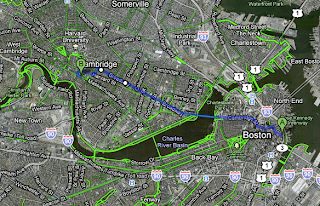 There's a popular map of running loops with the milage of loops from bridge to bridge,  and back in my running days I did loops and combos along both sides of the river depending on the milage I had scheduled, but these days I almost exclusively ride on the Cambridge side, partly because my destinations are on that side, and partly because it's a tiny bit shorter because of the curvature and shape of the river.

Tonight though I decided to take the "long way" home.  My first challenge was to get on the path.  Because the arterial that goes along that side of the river is limited access, the only way across is by one of the footbridges, which are somewhat steep, and pretty tightly turning, which make them tough, but not impossible to ride up. 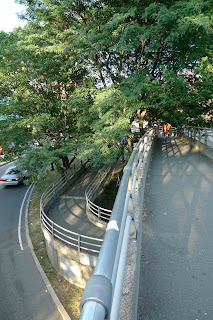 At the base of the footbridge is a public sailing club called community boating.  For a reasonable fee anyone can join and learn to sail, or just take a boat out.  Unfortunately the boats can't pass under the bridges, so you're limited to the largish, widest part of the river, called the Lagoon. 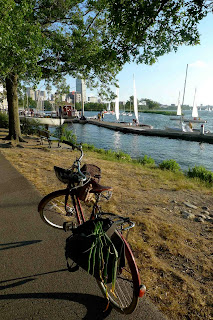 Gilbert admiring the boats
There's a little island, joined to the "mainland" by three or four bridges. 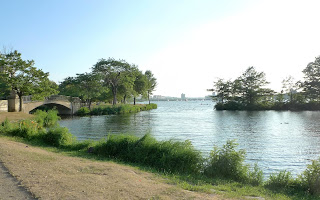 This carved bench sits at the first bridge,  right next to the Hatch shell where the Pops and other outdoor concerts are held 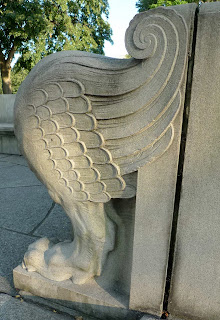 Winged lion foot.
There's a path on the island, which is full of joggers, lovers and dog walkers, but the bike "throughway is shunted off to the edge of the 6 lane road. 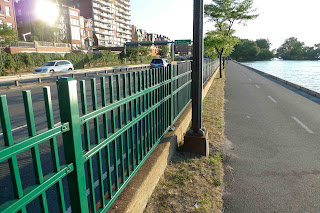 Should have stayed on the island.
As the island and "mainland touch, there's a little channel with lillypads.  I wonder if there are frogs to sit on them and sing? 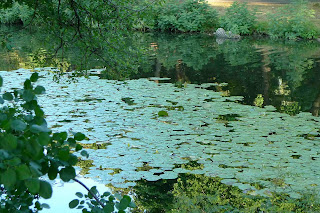 After about BU, the path gets a bit tougher-
There's a lot of raw infrastructure- flyovers, and overpasses and bridges over bridges.  Some of which is quite lovely in a post-industrial way. 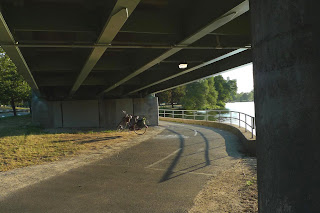 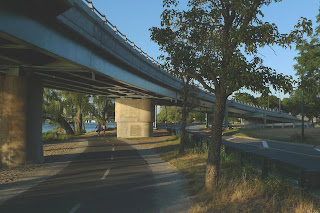 At the BU bridge, you can have an airplane above a car above a train above a bike. 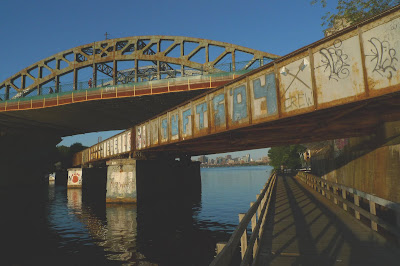 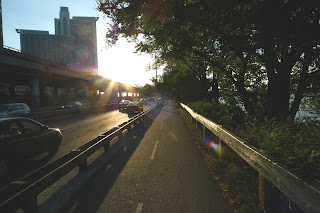 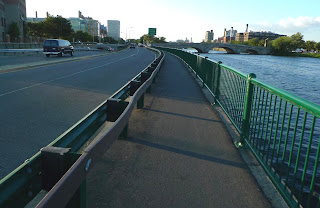 But this is pretty much why I normally take the Cambridge side-  it's not much fun riding along a 6' wide path with a fence on the breakwater on one side and a jersey barrier and 6 lanes of traffic on the other side.
After that things get a little more picturesque 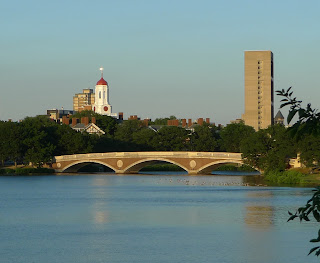 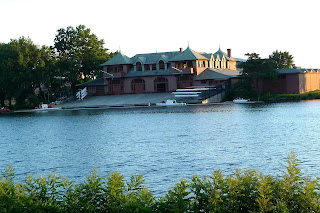 The Harvard rowing club.  I should do a whole post on this building-  it looks like brick, but is covered in red slate shingles.
And then I was home!
Posted by cycler at 11:18 PM

Labels: LGRAB, Seen from the saddle